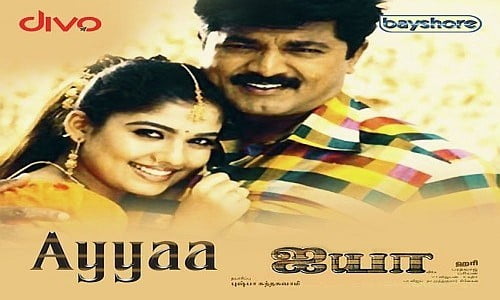 Ayya (Eng: Master) is a 2005 Tamil drama film written and directed by Hari. presented by K. Balachander and produced by Pushpa Kandasamy under banner Kavithalayaa Productions. starring Sarath Kumar, Nayanthara, Prakash Raj, Napoleon and Vadivelu in the lead roles. The film was a success at the Chennai Box office and the music was rendered by Bharadwaj. Oru Vaarthai song was very famous around South India. This movie was also Nayanthara’s debut in Tamil films. The film was dubbed and released in Telugu as Maa Daivam Peddayana.
The movie starts in 1970s, where there is heavy drought in southern districts of Tamil Nadu. Ayyadurai (Sarath Kumar) and Maadasaamy (Napoleon) are close friends and landlords of different castes in Tenkasi town in Tirunelveli district, and they try hard to help people and save them from dying during the drought. Local MLA (OAK Sundar), also a relative of Madasami, smuggles rice given by the government and people protest, knowing about this. The MLA denies knowing anything about the sanctioned rice. That night, he starts to smuggle the rice, but the lorries are waylaid and ransacked by the people led by Madasamy. The MLA comes there and starts shooting towards people’s legs. Ayyadurai sees the MLA aiming for Madasamy’s head and pushes him. Then Ayyadurai beats the MLA using hilt of the gun, following which he dies. But the local people support Ayyadurai and save him from police and also urge him to contest in the assembly by-elections.
Now the movie comes to the present, where Ayyadurai has been the unopposed MLA of Tenkasi for more than 35 years. He returns from Chennai after resgining his post, because the state department did not sanction his request to renovate the lakes in his area. His son Chelladurai (Sarath Kumar), a civil engineer, runs their business and helps his father for the people’s welfare. Selvi (Nayanthara) is Madasami’s teenage daughter who flunks her +2 exams openly as she loves Chelladurai. Meanwhile, Karuppasami (Prakash Raj) is the son of the MLA killed by Ayyadurai and wants to take revenge by either defeating or killing Ayyadurai. He has contested thrice against Ayyadurai in the past 10 years with no avail. He has made around 20 attempts on Ayyadurai’s life without any success. Meanwhile, Selvi proposes her love to Chelladurai, but he does not accept, saying that it might result in clashes between their families, as they both belong to different castes. Also, there comes a flashback where it is shown that Chelladurai’s marriage with Malavika got cancelled a few years back as she eloped with her lover on the day of marriage, which made Chelladurai feel embarrassed, and he preferred to stay unmarried.
Selvi informs about her love to both families, and they decide to get them married. Now, Karuppasami plays trick to separate both Ayyadurai and Madasami. He sends police on the day of marriage, saying that Selvi is still a minor and it is illegal to get her married before 18 years of age. Ayyadurai accepts that and informs Madasami to postpone the wedding. This angers Madasami, and he believes the police were sent only by Ayyadurai to cancel the marriage, as both of them belonged to different castes. Karuppasami uses this opportunity to get close to Madasami, and makes him the evidence for the murder of his father a few years back by Ayyadurai. The police arrests Ayyadurai. The general election dates are announced in the state. The ruling party again gives chance for Karuppasamy to contest, giving him an ultimatum to win. Ayyadurai can’t contest due to the murder case, and hence he nominates Chelladurai in his stead. Karuppasami plans to murder Madasami and blame Chelladurai for that so that Karupasami can get both caste votes and win the election. But before that, Chelladurai saves Madasamy. Chelladurai gives his signed withdrawal form to Karuppasamy and says that let him become the unopposed MLA, as he is also a good-natured man, and his anger is only on Ayyadurai and not on the people of the town. Karupasami realizes his mistake and apologizes to Ayyadurai and Chelladurai for all his criminal activities. But Ayyadurai prefers to stay in prison as he still feels guilty of murdering Karupasami’s father years ago. Karuppasamy becomes the MLA, and Chelladurai and Selvi get married to each other.