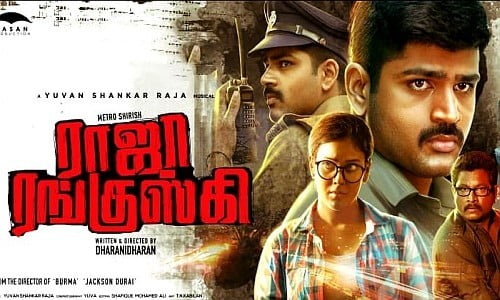 Raja Ranguski is a 2018 film directed by Dharani Dharan, starring Shirish Sharavanan and Chandini Tamilarasan in the leading roles. The film also stars Anupama Kumar in an important role. The film features music composed by Yuvan Shankar Raja. Chandini plays title role of Ranguski in this film. This film received generally positive reviews.
Raja is a police constable who falls in love with an aspiring writer Ranguski. He often visits Maria, a senior citizen who has demanded police protection as she is an antique collector and possesses many valuable things. Maria and Ranguski live in the same housing complex. Raja tries to woo Ranguski by making her prank calls in the name of a stranger and forcing her to love him instead. As Ranguski is frustrated by this, she falls in love with Raja. To Raja’s surprise, he finds that Ranguski still gets such calls from a stranger. Soon, he too gets such calls, and the caller threatens to kill Ranguski. Raja rushes to Ranguski’s home to save her and eventually does, but he finds out that the killer has killed Maria. Circumstances prove that Raja is the killer, and the police arrest him. Will Raja be able to escape and find out who is the real killer forms the crux of the movie, which ends with an unexpected twist.