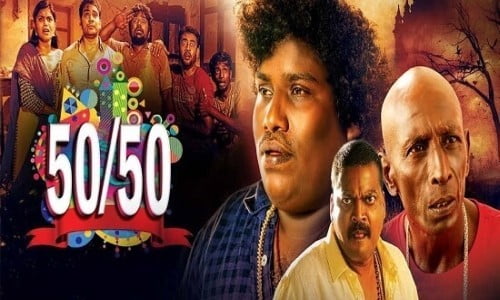 5050 is an 2019 Indian Tamil-language horror comedy film directed by Krishna Sai. The film stars Sethu, Shruthi Ramakrishnan, Bavithra, and Shreya Gupta. This film marks Ramakrishnan’s return to Tamil cinema after a sabbatical and Bavithra’s lead film debut.
The venture began production in 2016 with Sethu and Kannada actress and Shruthi Ramakrishnan in the lead roles. Director Krishna Sai says the film is about three IT guys: Sethu, Bala Saravanan, and Dheena from Kalakka Povathu Yaaru?, who have lost their jobs and are involved in petty theft to have a decent life. The film was shot in Chennai and Pondicherry. Bavithra, a model anchor, was roped in to play the role of Shruthi’s younger sister. Nandha Saravanan, who is known for his role in Ghilli, plays an inspector who will use the three IT guys to take revenge on his own personal enemies, which will be played by Rajendran, John Vijay, and Yogi Babu.