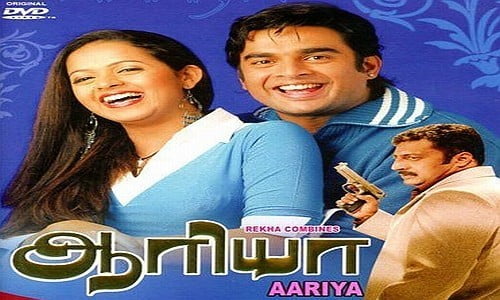 Aarya is a 2007 Tamil romantic comedy film directed by Balasekaran and produced by Manoj Kumar. The film starred Madhavan and Bhavana in the lead roles, while Prakash Raj, Vadivelu and Tejashree appear in supporting roles. The film’s music was composed by Mani Sharma, and the venture had a theatrical release across Tamil Nadu in August 2007.
Deepika (Bhavana) is an arrogant, rich girl. A medical college student, she dictates terms at the college. Sister of local don Kasi (Prakash Raj), she is feared by students, professors, and the college dean. Enters Aarya (Madhavan), a final-year student who comes to Chennai Medical College from Coimbatore. A soft-spoken Aarya runs into Deepika. They develop cold shoulders. In a fit of rage, she kidnaps his sister, but he faces her challenges daringly. However, she soon falls in love with him, but he is not ready to marry a ruffian’s sister. The remaining story tells us how the brother and sister put pressure on him to become a rowdy so his status is equal enough as Kasi’s so Aarya can marry Deepika. Meanwhile, “Snake” Babu (Vadivelu) is elected the area councillor and has a few encounters with Aarya and one with Deepika.