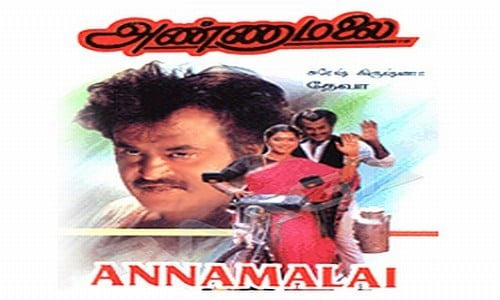 Annamalai is a 1992 Tamil film directed by Suresh Krishna and produced by Rajam Balachander and Pushpa Kandasamy under Kavithalaya Productions. A remake of 1987 the Hindi film Khudgarz, the film stars Rajinikanth, Kushboo and Sarath Babu in the lead roles with Radha Ravi, Nizhalgal Ravi and Manorama playing supporting roles.
The film revolves around a poor milkman, and a wealthy hotelier, who have been friends since childhood, a friendship opposed by Ashok’s father who attempts to create a rift between the two.
The film was announced in March 1992 with the director Vasanth, who later opted out due to personal reasons. Suresh Krissna replaced him as director, and also contributed to the screenplay while Shanmugasundaram wrote the dialogues. Principal photography began in the same month and the entire filming process lasted 45 working days. The score and soundtrack were composed by Deva and lyrics for the songs were written by Vairamuthu. The cinematography was handled by P. S. Prakash and editing by the duo Ganesh Kumar.
The film was released on 27 June 1992 became a blockbuster at box-office and was the highest grossing film in Rajinikanth’s career until 1995 when the record was broken by Baashha.
Annamalai (Rajinikanth) is a milkman while Ashok (Sarath Babu) is the owner of a five star hotel in Chennai. They both are very close friends from childhood days. But Ashok’s father (Radha Ravi) does not like his son’s friendship with a poor milkman. He is kind-hearted and is innocent. He falls in love with Subbu (Kushboo). Ashok falls in love with a poor girl Shanthi (Rekha) and he arranges Ashok and Shanthi’s wedding. This angers Ashok’s father as he thinks Shanthi does not have the status to become his daughter in law.
Annamalai encounters a problem with Ekambaram (Vinu Chakravarthy) following which Ekambaram understands his good nature. His small home along with a few cents of empty land is located in prime location and Radharavi pressurizes Ashok to buy that land so that they can construct one more star hotel. Ashok initially hesitates as he does not want to mix business and friendship, but later agrees and asks him with hesitation. But Annamalai happily accepts and also agrees to give the land for free of cost. Ashok feels proud of him and informs his father that he has to be made a shareholder in the new hotel. Ashok’s father agrees but decides to cheat Annamalai and gets sign in empty papers.
The star hotel is constructed and Ashok’s father plans to demolish Annamalai’s home which is located next to the hotel. Also, Ashok’s father and Ashok’s cousin Sarkunam (Nizhalgal Ravi), forge documents and take control of his empty land. Annamalai learns of this plan and picks up quarrel with Ashok’s father. Ashok interrupts and he misunderstands Annamalai without knowing the truth for fighting with Ashok’s father. Ashok gets angry and demolishes Annamalai’s home which is in the remembrance of Annamalai’s father. He gets shocked seeing Ashok’s activities and challenges that he will also become rich and take revenge on Ashok.
Ekambaram helps him to secure funds and he starts a small sweet business and over a few years he becomes so rich and he also builds a star hotel in Chennai which becomes more popular than Ashok’s hotel. Sarkunam steals money from Ashok and knowing this, Ashok asks him to leave. Sarkunam joins Annamalai’s hotel and also gets married to his sister, Vaishnavi. Annamalai wins Ashok and become the president of hotels association and Ashok also faces financial troubles. Annamalai’s daughter and Ashok’s son are college-mates and love each other, much to his anger. Ashok and Annamalai appear for a public auction and the auction price keeps increasing. Ashok wins the auction for Rs.12 Crores despite his father asking him not to quote such a huge amount as this was a trick played by him to increase the price.
Ashok has no money to pay for the auction and is forced to sell his bungalow to get money. Annamalai purchases Ashok’s bungalow thereby winning the challenge made years ago. But he gives the registration document to his mother (Manorama) and asks her to handover to Ashok itself as he does not want to punish his friend. Ashok and his father realizes their mistake and apologise to Manorama knowing Annamalai’s kind heart. Annamalai also gets to know that it was only Radharavi and Sarkunam who forged the documents and Ashok was unaware of the his father’s plans. In the meantime Sarkunam tries to kill both Ashok and Annamalai and try to take his properties. But Ashok and he fight together and Sarkunam realises his mistake. Annamalai and Ashok finally join together and become best friends again.