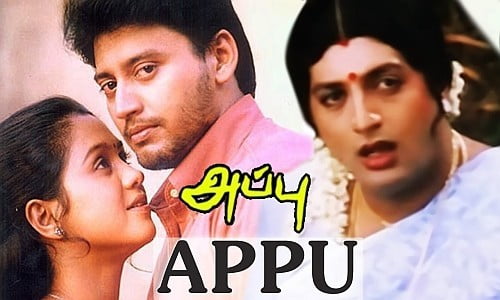 Appu is a 2000 Tamil romantic thriller film directed by Vasanth. The movie stars Prashanth, Devayani and Prakash Raj. The film was a remake of Hindi film Sadak.
During production, the film was briefly titled as Surya before being renamed to Appu. During the shoot of the film, some eunuchs hailing from Thiruvannamalai, threatened that if portions of the film were not reshot, they would initiate large scale protests and do their best to hinder shooting schedules.
The film score and the soundtrack were composed by film composer Deva. The soundtrack, released in 2000, features 5 tracks.
Appu (Prashanth) is a taxi driver in Mumbai, he had a sister (Eashwari Rao) who committed suicide as her husband sold her to a brothel for money. One day, Appu meets Seetha (Devayani) and develops affection immediately. But Sita is also sold by her uncle to a brothel managed by Maharani (Prakash Raj) as he is unable to repay his debt. Appu decides to save Seetha from brothel and in the meantime, he finds out that his sister was also sold to the same brothel managed by Maharani and decides to take revenge. Love blossoms between him and Seetha. Appu loses his friend Mano (Vignesh) and his lover Pooja (Kaveri) as they both get killed by Maharani. Finally he kills Maharani and unites with Seetha.