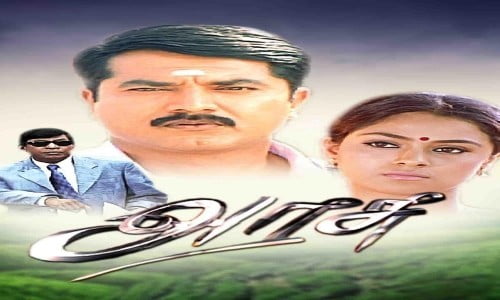 Arasu is an Indian 2003 Tamil action masala film starring R. Sarathkumar, Roja, Simran, Sai Kumar, Vadivelu, and Delhi Ganesh. The film was directed by Suresh. The score and soundtrack was composed by Mani Sharma. This film was declared as a Super-Hit in the box office.
The movie starts with Arasu (Sarathukumar) murdering a person in Mumbai and soon the story shifts to Kumbakonam where he is employed in a temple by Venu Shastri (Delhi Ganesh). Arasu’s calm nature and responsible behavior impresses everyone in the locality. Meera (Simran), Venu Shastri’s daughter falls in love with him. One day, Arasu sees the news about the release of a criminal from jail and gets angered. He also kills the criminal with the help of a few men.
Everyone in Kumbakonam gets shocked knowing that he is a murderer. Arasu meets Venu Shastri’s family to disclose the truth. A flashback is shown where he is the only son of Nataraj (Sarath Kumar – dual role) who is fondly called as periyavar by his followers in Chennai. Periyavar is a good natured don striving hard for the welfare of the poor and slum dwellers in Chennai. Sivagami (Roja) is Periyavar’s wife.
Sabapathy (Sai Kumar) is a rich business tycoon who goes to any extent for earning money. Trouble erupts between Sabapathy and Periyavar following which Sabapathy is arrested and sentenced to imprisonment for his illegal activities which led to death of a few young girls. As a means of revenge, Sabapathy’s brother (Riyaz Khan) and his henchmen kill Periyavar and Sivagami. Arasu is angered and vows revenge against Sabapathy and his men. Hearing this, Venu Shastri and Meera understand Arasu’s position and decide to save him by not disclosing his whereabouts to policemen.
Despite all the attempts by police to arrest Arasu, he successfully kills Sabapathy and surrenders to police. He is sentenced to imprisonment and gets released after 5 years. In the end, he comes to meet Meera and both get united.