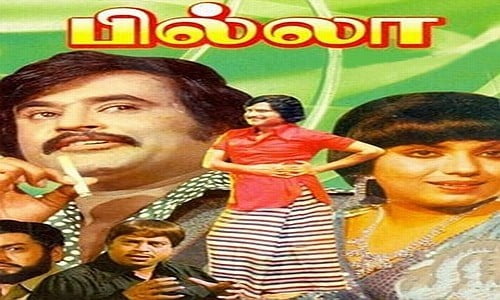 Billa is a 1980 Indian Tamil crime movie produced by Suresh Balaje and directed by R. Krishnamurthy. The film stars Rajinikanth, K. Balaji, Thengai Srinivasan, Manorama, Sripriya, Reena Roy and Major Sundarrajan. It is extensively based on the Hindi film Don (1978), with changes made in the script to suit the Tamil audience. The film revolves around Billa (Rajinikanth), a feared Mafia don in Madras, who is fatally wounded during an encounter with the police. Wanting to uncover his accomplices, the police commissioner Alexander (K. Balaji) trains a lookalike village bumpkin Rajappa (also Rajinikanth) to pose as Billa and infiltrate the gang. The rest of the film deals with how Rajappa learns more about Billa’s gang, and tries to get all of them arrested. The film was released on 26 January 1980, to commercial success.