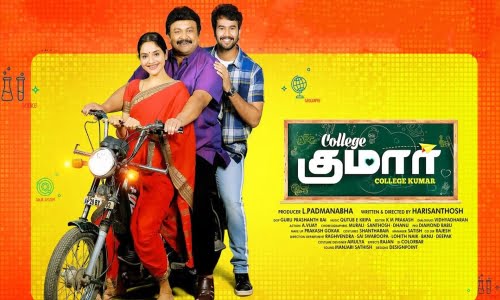 College Kumar is a 2020 Indian comedy film written and directed by Hari Santhosh. A remake of director’s own 2017 Kannada film of the same name, it was simultaneously shot in Tamil and Telugu languages, with Prabhu starring in Tamil and Rajendra Prasad replacing him in Telugu. Rahul Vijay, Priya Vadlamani and Madhoo co-star in both versions. The film was released on 6 March 2020 in both languages.
Thiru Kumaran, a peon, wants to make his son an auditor because his employer, an arrogant auditor, insults him. As time passes by, his son, Shiva Kumar disappoints him by not being a bright student at college. Thiru’s wife Janaki too is upset over the same. He loses his cool when Shiva is terminated from college for indulging in a malpractice. An infuriated son vents out his frustration to his father and challenges him to join college and earn a degree. How Thiru takes up the challenge forms the rest of the story.