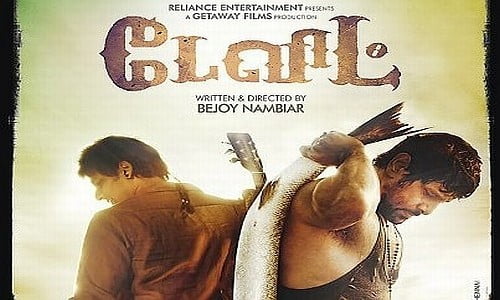 David is a 2013 Indian Tamil movie directed by Bejoy Nambiar, starring Vikram and Jiiva in the title roles, alongside Tabu, Lara Dutta, Isha Sharvani and Nassar. An altered version with the same title featuring a slightly different cast was simultaneously shot in Hindi. The plot revolves around the lives of two different men named David, who are about to take a step which is going to change their lives forever. The film was released worldwide on 1 February 2013 to mixed reviews and performed average business at the box office.
The story is about two David’s living in different parts of India whose lives eventually come together in a twist of events.
Mumbai, 1999: 19-year-old David (Jiiva) is an amateur guitarist born into a family of lower-middle class Christians in a poor colony in Mumbai. He is a happy go lucky teenager who dreams of becoming a professional musician and sending his sister, Susannah (Sheetal Menon) off to Dubai to pursue her dreams. Their father, Noel (Nassar), a Protestant priest rallies the locals to do charity work for those in need. A Hindu fanatic politician, Malati Tai (Rohini Hattangadi), finds out about this and makes it appear as if David’s father is converting poor people to Christianity in return for money. She attacks David’s colony with the help of gangsters and humiliates Noel by blackening his face in front of the media. Traumatized by this, the priest starts to lose his mind. An angry David is then easily persuaded by a political activist to assassinate Malati at a rally to seek vengeance. However, the plan is foiled when the activist himself kills tries to assassinate Malati by shooting her.
Goa, 2010: 30-year-old David (Vikram) is an alcoholic fisherman living in the small fishing village of Betul in Goa. He falls in love with the deaf and mute Roma (Isha Sharvani) – the only hitch is that she is engaged to be married to his best friend Peter (Nishan Nanaiah) in 10 days. When he finds out Peter does not really love her but is only marrying her for her wealthy father’s boat which he will receive as dowry, David is coaxed by his friend, Frenny (Tabu) to stop the wedding. However, David comes to realise that his intentions might not be sincere as both his mother and the priest who tries to help him stop the wedding become involved in separate accidents and are hospitalized. On the day of the wedding, he plans to profess his love for Roma until Peter reveals that he actually sincerely loves her and was only lying that he was marrying her for the dowry out of fear he would be teased. David decides not to stop the wedding.
Gradually, it is revealed that both Davids are connected somehow in the turn of events. Witnessing the Malati’s attempted assassination makes the Mumbai David realise what he almost became had he been the one to do the assassination. He then moves to Goa and becomes a priest like his father. In 2010, he is the priest that marries off Peter to Roma.