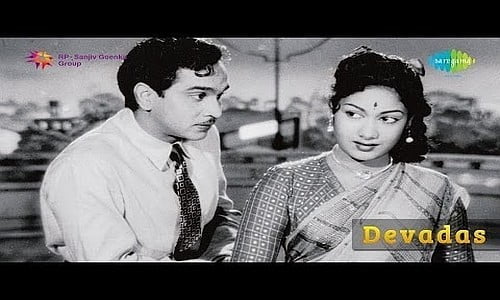 Devadas is a 1953 Tamil romance movie, directed by Vedantam Raghavaiah and produced by D. L. Narayana for Vinodha Pictures. Aluri Chakrapani wrote the script based on Sharat Chandra Chattopadhyay’s novel, Devdas. C. R. Subbaraman composed the film’s music. The film was edited by P. V. Narayanan, while B. S. Ranga provided the cinematography.
The film focuses on Devadasu and Parvati, who have been in love since childhood. Parvati’s father objects to the relationship and forces her to marry a middle-aged zamindar. Unable to cope with his failure to win Parvati, Devadas turns into a drunkard, and the rest of the film is about whether or not Devadas meets Parvati again.
The film was produced in Telugu (as Devadasu) with slightly different casts. Akkineni Nageswara Rao, Savitri, and Lalitha played the in the lead roles in both versions; supporting roles were played by S. V. Ranga Rao, Chilakalapudi Seeta Rama Anjaneyulu, Dorasamy and Surabhi Kamalabai in the Telugu version, and by M. N. Nambiar, Sachu and Chandrakumari in the Tamil version. Devadasu is the inaugural recipient of the Filmfare Award for Best Film – Telugu.
Devadasu was released on 26 June 1953, and the Tamil version was released three months later, on 11 September 1953. Both versions were critically and commercially successful. The Telugu version has since achieved cult status, with terms and phrases from the film being widely cited. Both versions proved to be a major breakthrough in Nageswara Rao’s career.
Devadasu, the son of Ravulapalle zamindar Narayana Rao, and Parvati, daughter of his poor neighbour Neelakantham, are childhood friends. The zamindar enrolls his son in a boarding school in the city. When the grown-up Devadasu returns to the village after finishing his education, his childhood friendship with Parvati turns into love.
When Parvati’s grandmother talks of the alliance, the zamindar refuses the proposal. Irritated, Neelakantham vows to find a wealthier prospective son-in-law and arranges Parvati’s marriage with the zamindar of Durgapuram, an elderly widower with children. However, Parvati secretly meets Devadasu and asks him to accept her as his wife.
Devadasu is surprised at her visit, sends her away, and goes back to the city. He writes to Parvati that he cannot defy his parents, so Parvati marries the old zamindar. Unable to forget her, Devadasu is despondent. He takes to drinking alcohol excessively and is encouraged by his friend Bhagawan, who also introduces him to Chandramukhi, a prostitute.
While Parvati settles into her new house, Devadasu chooses the path of self-destruction. On the advice of Chandramukhi, he leaves for his village, but goes to Durgapuram to keep a promise he had made to Parvati that he visit her before his death. Devadasu breathes his last in front of her house. Parvati rushes to see him, but the door is closed by her family and she collapses.