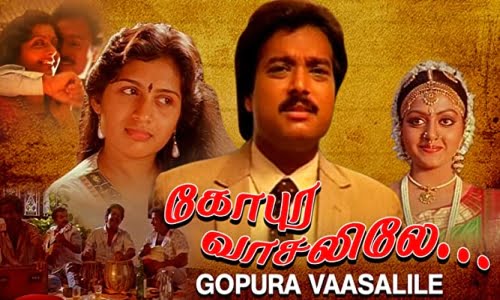 Gopura Vaasalile (Eng: At the Doorstep of the Gopuram) is a 1991 Indian Tamil-language black comedy film directed by Priyadarshan. A remake of the Malayalam film Pavam Pavam Rajakumaran (1990), it stars Karthik and Bhanupriya. Malayalam director Priyadarshan was to have made his Tamil debut with the film Chinnamanikkuyile, which never saw a theatrical release. As a result, this film became his Tamil debut.
Manohar, a schoolteacher, leads a dull and unexciting life after the death of his lover. Fortunately, his life takes a new turn when his friends give him a reason to live and love once again.