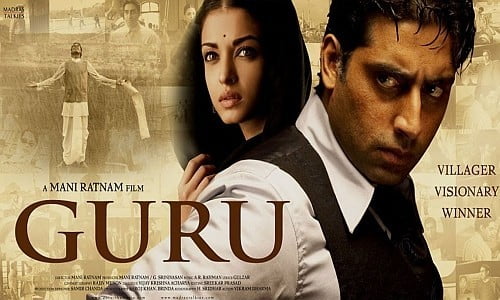 Guru is a 2007 Indian movie loosely based on the life of Dhirubhai Ambani, a business magnate who founded Reliance Industries. The film was co-written and directed by Mani Ratnam. It stars Abhishek Bachchan, Aishwarya Rai, R. Madhavan, Vidya Balan, Arya Babbar, Mithun Chakraborty in the leading roles. The film also has Mallika Sherawat in a guest appearance. The score and soundtrack for the film was composed by A. R. Rahman. The film was dubbed and released simultaneously in Tamil as Guru and in Telugu as Gurukanth. In the Tamil version of the film, the lead role (Abhishek Bachchan) was dubbed by Suriya. The film was released on 12 January 2007 with its première at the Elgin Theatre in Toronto, Canada, on Thursday 11 January 2007, making it the first Indian film to have a mainstream international première in Canada. The film was premiered in the Tous Les Cinemas du Monde (World Cinema) section of 2007 Cannes Film Festival.
The beginning of the film is set in 1951 in a small village of Idar in Sabarkantha district, northern Gujarat, a young man named Gurukant “Guru” Desai (Abhishek Bachchan) dreams of making it big some day. His father (Rajendra Gupta), the headmaster of the village school, tells him not to dream and that dreams never come true. Gurukant decides to go to Turkey and enter the spice trade; later, he is promoted but refuses the job, as he wants to work for himself. Back in his village, he marries Sujata (Aishwarya Rai Bachchan), mainly because of the dowry she brings him. Along with Sujata and her brother Jignesh (Arya Babbar), Guru migrates to Bombay and starts trading in cloth. Gradually, he expands his business and sets up manufacturing units of his own, under the name “Shakti Corporation”.
Manik “Nanaji” Dasgupta (Mithun Chakraborty), who publishes a newspaper Swatantra, treats Guru as his son. Guru likewise looks upon him as a father figure who gives him support during his early days of struggle in Bombay. He also develops a strong friendship with Meenu (Vidya Balan), granddaughter of Dasgupta. Meenu develops multiple sclerosis as she grows up, and begins using a wheelchair.
As Gurukant Desai’s business grows into one of the largest in India, he ruthlessly pursues success. He smuggles machine parts for his polyester mills, illegally creates goods, and manipulates stocks to make a higher profit. But when Manik Dasgupta learns that Guru’s means of success are not always honest, he, along with a reporter of his newspaper, Shyam Saxena (Madhavan), decide to expose Guru’s increasingly corrupt ways.
The stress of his battle with the newspaper causes Guru to have a stroke, and he is paralysed on his right side. Meanwhile, Meenu (Vidya Balan), who is now married to Shyam, is slowly weakening from her illness, and eventually dies. In the end, Guru is brought before a private government inquiry on 16 October 1980 to defend himself against the charges pressed against him, but delivers a speech in front of the press the next day that forces the government to clear him of 27 of the 29 charges against him. He is charged with a fine of 6.3 million (equivalent to 62 million or US$920,000 in 2013) and 96,000 (equivalent to 940,000 or US$14,000 in 2013) for the respective 2 charges, which are proved and is allowed to return to his company. The story ends with Guru continuing to dream of the future and even greater success for the Shakti companies.