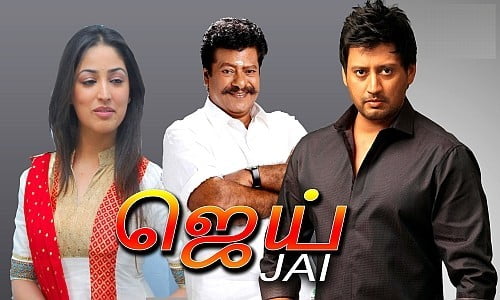 Jai is a 2004 Tamil language action film directed by S. Narayan, who had previously worked primarily on Kannada language films. The film featured Prashanth and Anshu Ambani in the lead roles while Thiagarajan, Rajkiran and Bhanupriya played supporting roles. A remake of the successful 2002 Telugu film Aadi, the film had music composed by Mani Sharma and was produced by Thiagarajan. The film was released in January 2004.
Nallamuthu (Rajkiran) receives Veerapandi (Thiagarajan), his wife (Bhanupriya), and 8-year-old son Jai returning from USA after a long gap. Veerapandi’s late father was a well-known factionist in that area and owned a land of 4,000 acres (1,600 ha). While leaving for USA, Veerapandi gave the responsibility of managing this land to Vajravelu (Rajan P. Dev). Now back in India, Veerapandi realizes Vajravelu is misusing his power. He wants to donate all his land to the 2000 families staying in that village. When Vajravelu comes to know of this charity giveaway, he attacks Veerapandi, killing him and his wife. Nallamuthu, being a trusted lieutenant of Veerapandi, takes the kid Jai and escapes to the city. After the murders, Veerapandi’s trusted people are put in jail with a prison sentence of 14 years.
After 12 years later, the now grown up Jai (Prashanth) studies in a college and falls in love with Nandhini (Anshu Ambani), Vajravelu’s daughter. Nallamuthu has raised him in Chennai as a fun-loving boy, but he grows up a hot-tempered young lad. Completing her studies, Nandhini returns to her hometown at her father’s place. After a hiatus of 14 years, Jai comes along with other trusted members of his father who are released from jail. Nallamuthu wants to take revenge on Vajravelu and get back all the land so that he can distribute it to the villagers. The rest of the film deals with how Jai succeeds.