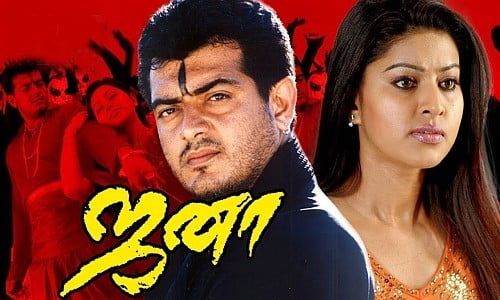 Jana is a 2004 Tamil action film directed by Shaji Kailas. The film stars Ajith Kumar in the title role with Sneha as the heroine, alongside an ensemble cast. The film’s score and soundtrack are composed by Dhina, while the camera is handled by Rajeev Ravi.
Janardhanan lives in a village in Tamil Nadu, leading life incognito, taking up the cause of the villagers, and making enemies around. Then comes the twist in the tale, the caption in the interval reading ‘…Interval…Wait just see other face’. When the film reopens, we do get to see Jana’s other face. Jana is a terror to the Mumbai dons, corrupt politicians, and their ilk, killing, and maiming. He wants to teach a lesson to them. Both the faces of Jana merge finally when his bete noire Bhandari comes out of jail to have his final round with him.