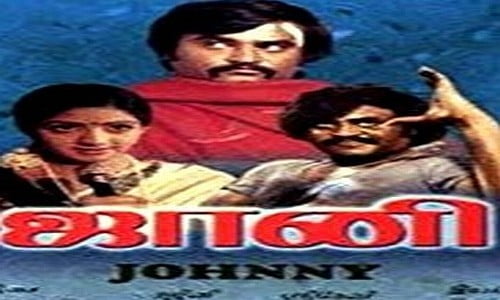 Johnny is a 1980 Tamil film directed by Mahendran. It had Rajinikanth and Sridevi in the main roles with Rajinikanth in a dual role.
Archana (Sridevi) is a popular singer, and Johnny (Rajinikanth) is her ardent fan, he is a con-man who does petty-thefts (only on the greedy ones) to close the loan taken by his father. He never misses Archana’s concerts and she notices this. A tender love develops between the two, but he is guarded in accepting Archana’s love due to his not-so-clean background. But one day he accepts the love of Archana when she proposes to him. Meanwhile, Vidyasagar (Rajinikanth), a barber and look-alike of Johnny, lives a lonely life with his assortment of pet animals. He falls for Bhama (Deepa) another loner and they both plan to marry. Vidyasagar notices his lover’s infidelity and kills her in rage. Knowing about his look-alike Johnny and knowing that he is wanted by the police, he tries to pass on the murder charge to him and gives up on women as well looking at them in low light. Both of them are chased by police, he hides in a forest, and Vidyasagar tries to pass off as Johnny by taking refuge in Archana’s house. Archana gets hurt by the curt behaviour of Vidyasagar and she is confused on the change in his metamorphosis. Finally, Vidyasagar realizes his folly, understands not all women are same as well as their love and unites the lovers by getting caught in the police, taking responsibility for Johnny’s crimes included.