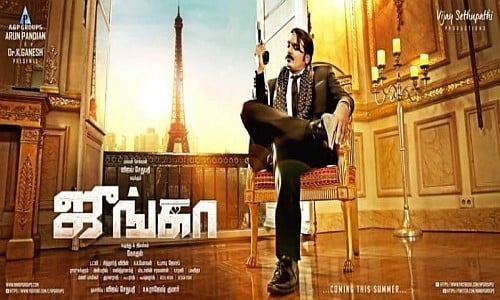 Junga is a 2018 Indian Tamil-language mafia comedy film that was taken in Paris France written and directed by Gokul. The film features Vijay Sethupathi, Sayyeshaa and Madonna Sebastian in the lead roles. The movie released to a mixed review with movie buffs, praising Vijay Sethupathi’s performance and Yogi Babu’s comedy performances.
The film starts with Inspector Manimaran (Vinoth Munna) taking the job of Don Junga’s (Vijay Sethupathi) encounter, along with Durai Singam (Rajendran). On the way to his encounter, Junga tells his story. Back in Pollachi, he works as a bus conductor and is in love with Thoppuli (Madonna Sebastian). He gets involved in a fight, which angers his mother (Saranya Ponvannan) as his father Ranga and grandfather Linga were dons. They also lost their theatre Cinema Paradise and had to sell it to Kumarasamy Chettiyaar (Suresh Chandra Menon). So his mother fears he will also become a don. Junga tells his mother he will not be a don and will retrieve their ownership of the theatre. He goes to Chennai with Yo Yo (Yogi Babu) and starts saving money towards his goal. He also leaves Thoppuli as she wants him to give her a luxurious life and gift her with 365 sarees for each day of the year. One day, Junga comes to know that the theatre is being brought down and Chettiyaar is planning to sell it to a foreign company. He goes to Chettiyaar’s house and gives him a crore to buy back his theatre, but Chettiyaar insults him. Junga challenges Chettiyaar that he will retrieve back his theatre. He decides to kidnap Chettiyaar’s daughter Yazhini (Sayyeshaa), who is in Paris, so he goes there with Yo Yo, but the Italian mafia group kidnaps Yazhini to release their leader, who was arrested by the French police. Junga tells Chettiyaar he has kidnapped Yazhini and fights with the mafia group to rescue her from them. Yazhini and Junga escape, and Chettiyaar agrees to give Junga’s family the theatre in exchange for Yazhini. Yazhini and Junga later get married.