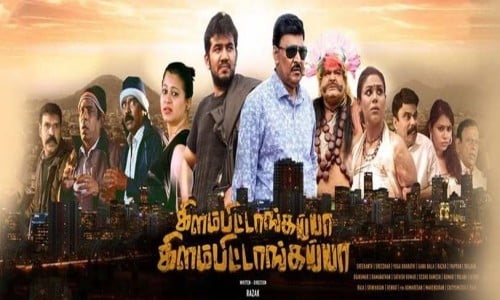 Kilambitaangayaa Kilambitaangayaa is 2018 tamil movie which joins those numerous attempts which are made for no reason. Neither the director nor the cast and crew seem to be unaware of why the film was made in the first place. The biggest challenge for a reviewer is to find out which genre the movie belongs to.
The plot revolves around four men in their 60s planning to kidnap a child for a huge amount. When they realise that they are too old for it, they hire four youngsters who could help them in completing their task. The four-member young team manages to kidnap the child and its mother and take them to a forest. The father of the child files a police complaint and the cops come to a conclusion by mistake that terrorists are behind the act.
Later, a stringent cop (Bhagyaraj) is appointed to investigate this case. Finally, the child is saved, not because of the cop’s effort – the mother finds her out of nowhere. We keep wondering why the armed police force were doing throughout the film. While watching this film , one feels that the plot has been developed keeping in mind that random scenes are to be shot with available artistes so as to make its duration in less than two hours, which actually is its only positive aspect.