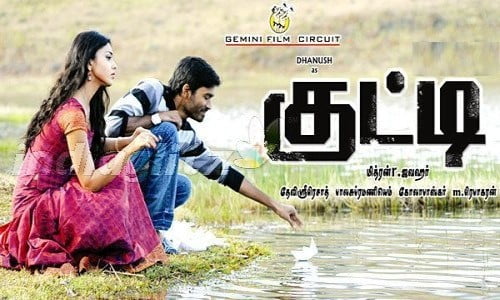 Kutty (Eng: Small kid) is 2010 Indian Tamil-language romantic action-drama film directed by Mithran Jawahar, who with the project, recombines with the lead actor following the success of their previous venture. The film stars Dhanush, Shriya Saran and Sameer Dattani in the lead roles with Radha Ravi playing a pivotal role. The film, a remake of the Telugu film Arya (2004), has Gemini Film Circuit as the producers, whilst Devi Sri Prasad handled the music composition.
At the Kanyakumari beach, Geetha (Shriya Saran) looks at a lonely lying personal diary where she enjoys a poem written in it. She admires the poem by replying on the same page. While she and her friend admire the beauty of sunrise, she accidentally loses one of her anklets (it falls in the sea). She sees a person jumping in after it and she perceives him to have died in the waters. The incident haunts her in her dream again and again and feels very guilty for it. In her college, she meets a rich, handsome boy Arjun (Sameer Dattani) who impresses her to win her love. He proposes her and threatens her to love him or else he would die by jumping from college roof top. Already feeling guilty for being cause of a person’s death, not willing to let it happen again Geetha accepts his love and screams ‘I love You’ in front of the entire college to Arjun which was witnessed by Kutty (Dhanush).
Kutty proposes his love to Geetha in front of Arjun, which shocks Geetha and annoys Arjun. Geetha turns down his request again and again and reminds him of her relationship with Arjun. But Kutty instead tells her that it is not an issue to him and tells her to continue loving Arjun and he would never stop loving her. Arjun is irritated by the acting of Kutty. He fights with him in order to bully him into stopping but instead was challenged by Kutty, that if Arjun is confident in his love no one would separate Geetha from him & may the best man win. Arjun finds no option but to accept in order to prove his confidence in his love (else accept that his love is weak). While Kutty pulls all kind of stunts to impress Geetha (including winning a rigged race in order to protect Geetha’s chastity from Arjun) but fails to make her “feel his love”.
Arjun introduces Geetha to his father (Radha Ravi) expecting him to approve & bless their marriage but his father, seeing to further his political ambitions, engages a Minister’s daughter (who is shown to be a spoilt girl of questionable character), for Arjun. So Arjun escapes with Geetha who is helped by Kutty. Kutty, Arjun, Geetha are chased by Arjun’s father’s men but are unable to catch them. Meanwhile, old wounds renew between Kutty and Arjun. After an intense (kung-fu) fight with the henchmen (where Arjun runs & Kutty fights) Arjun leaves Geetha with Kutty without saying anything to either of them. Kutty takes care of Geetha, which touches her. She soon realises the love he has for her and regrets not having met him before her commitment to Arjun. She tries telling the same to him, but Kutty thinking that Geetha is scolding him closes his ears and does not hear what she actually said to him (he does that a couple of times in the movie). Arjun arrives at the scene his father in tow, now all happy for their marriage. Geetha leaves with Arjun to marry him. On the wedding day of Arjun & Geetha, Kutty wanders here and there to look after wedding related works. His friends understand his internal pain and ask him to cry. While Geetha is on her way to the ceremony, Kutty stops her and openly expresses his pain of his love and how he is going to miss her and asks if his love did touch her at least once, without knowing that his love touched her already. (He then laughs & passes it off as a prank). Geetha does not answer him. Kutty’s kids friends present Geetha a gift (from Kutty) in which she finds her lost anklet and the poem page where she wrote a reply while she was in Kanyakumari. Kutty was the person who jumped into the sea to take her anklet and was assumed dead, by Geetha. Geetha finally realises her love for Kutty, rejects her marriage with Arjun and goes to Kutty and accepts his love finally.