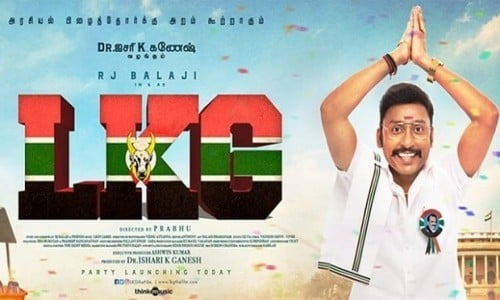 LKG (Interpreted as Lalgudi Karuppiah Gandhi) is a 2019 Indian Tamil-language political satire film directed by K. R. Prabhu on his directorial debut. The film stars RJ Balaji and Priya Anand in the main lead roles while Nanjil Sampath, J. K. Rithesh, Ramkumar Ganesan, and Mayilsamy play supporting roles. The film is produced by Ishari K. Ganesh under his production banner Vels Film International. Leon James has been roped into score music for the film while Pa. Vijay and popular filmmaker Vignesh Shivan are roped into pen lyrics for the songs. The film released on 22 February 2019.
The film begins with Lalgudi Karupaiah Gandhi (LKG) swearing in as Chief Minister (CM) of Tamil Nadu, where he is shot by a sniper. The story moves to a flashback where LKG is a ward councillor from Lalgudi and belongs to the ruling party. LKG aspires to achieve big in politics, unlike his father Azhagu Meiyappan, who neither created fame as a politician nor made money. The incumbent CM, Avudaiyappan Mudhaliar, falls ill and gets hospitalised, while Bojappan, the party secretary, becomes the interim CM.
Avudaiyppan dies, and a by-election is scheduled in his constituency. LKG decides to contest in the by-election on behalf of the ruling party. However, he needs to create some media visibility to get into Bojappan’s good books. LKG gets the help of Sarala Munusamy (Sara M. Samy), an employee of V Analytica – a multinational company which is involved in election strategy formulation. LKG goes to Delhi to protest and create an awareness against diseases, which gets the media’s attention. Finally, LKG gets Bojappan’s attention and is offered the party ticket to contest. However, Ramraj Pandian, who also happens to be from the same ruling party, gets furious and feels cheated by Bojappan. Ramraj challenges that he will contest in the election as an independent candidate and will try all means to break the party.
Now, LKG realises the hardships of contesting in elections. He understands that people are in favour of Ramraj due to his strong influence and image. LKG devises a strategy to tarnish Ramraj’s public image with the help of meme creators and his sidekicks. He spreads rumours that Ramraj is actually a woman disguised as man, which results in the public trolling Ramraj in social media. Ramraj is also insulted when he is unable to sing “Tamil Thai Valthu” during a college function. Ramraj discovers that V Analytica is behind LKG and strikes a deal with Sara to support him, for which she agrees.
As per Sara’s advice, Ramraj goes to Delhi and meets national level party leaders. He also tries to break the ruling party of Tamil Nadu and prevent Bojappan from trying to take all the party MLAs to a resort. Now it is revealed that Sara was actually pretending to be on Ramraj’s side. She comes back to help LKG, but a tussle comes within the party, while some party senior leaders do not want LKG to gain fame. However, Bojappan is in favour of LKG. During election, LKG wins against Ramraj, but Bojappan gets arrested in a few corruption cases, and LKG now becomes the CM of the state.
The flashback ends, and now it is revealed that LKG was wearing a bulletproof vest during the swearing in ceremony upon anticipating such incidents. The sniper is a youngster who aspires to some new gen politicians. LKG speaks in front of the media that he is in to bring a change and that he has transferred the corruption cases against Bojappan to the CBI. He also delivers a message that there are numerous educated youngsters contesting in elections independently with a hope of bringing a change but goes unnoticed by the public due to big political parties staying in the limelight. The sniper is convinced now, and the entire state people believes that LKG will bring some good to the state, unlike other politicians. In the end, Sara gives a smile upon seeing LKG, which implies that he is just becoming a true politician through his speech trying to woo public which was her strategy as well to win the hearts of people.