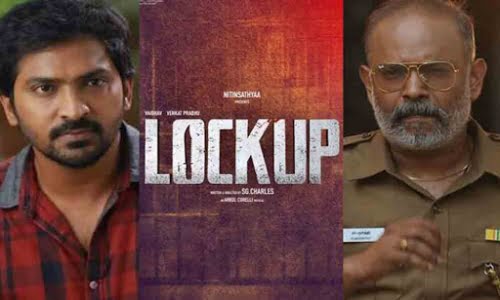 Lock Up is a 2020 Indian Tamil-language thriller film written and directed by SG Charles in his directorial debut and produced by Nithin Sathya. The film stars Vaibhav, Venkat Prabhu and Vani Bhojan. It was released on 14 August on ZEE5.
The film is produced by actor Nithin Sathya and is about two corrupt policemen played by Vaibhav and Venkat Prabhu. Nithin Sathya had previously worked with Vaibhav and Venkat Prabhu in Chennai 600028 II. The title Lock Up was chosen because the film is about a police lock-up and is based on several true incidents. This venture was promoted as the first film in which Vaibhav plays a police officer although he played a police officer in Taana (2020). Venkat Prabhu portrays the antagonist for the first time in his career.
Lock Up was released on 14 August 2020 on the over-the-top (OTT) media service ZEE5. It was initially scheduled for a theatrical release in November 2019 after post-production work had been completed.