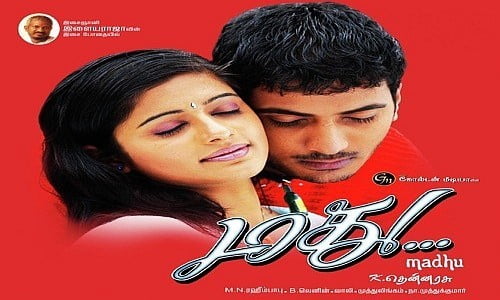 Madhu is a 2006 Tamil-language Indian feature film directed by K. Thennarasu and produced by K.Kaliya Moorthy, starring Jithan Ramesh, Priyamani and Ashish Vidyarthi. The film was released in 12 May 2006.
Madhukrishnan (Jithan Ramesh) always roams on a bike. Mercy (Priyamani) and Esther (Jahnavi) are friends and hostel mates. Mercy believes in Jesus and is very kind and humble towards others. Esther is bold, glamorous in dressing, and teases everyone. One day, when Esther teases Madhu, he kisses her publicly. Madhu falls in love with Mercy at first sight when she rescued a puppy from raining weather. He often gets the chance to meet Mercy. He comes to the hostel and expresses his love to Mercy, but she denies his love. After examination, Mercy goes to her hometown Mahi. He follows her. Her father Siluvai (Ashish Vidyarthi) owes to bring up his daughter to a good position. He becomes Siluvai’s favorite. Esther enters the scene with lots of change in her character. Siluvai comes to know about their love affair, and his decision forms the rest of the story. In the end, he and Mercy die by falling down from a hill.