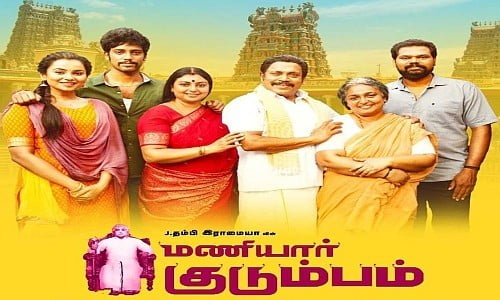 Maniyar Kudumbam (Eng: Maniyar’s family) is a 2018 Indian Tamil family comedy romantic drama film written and directed by Thambi Ramaiah. This was only the third directorial venture for the latter after the film Indiralohathil Na Azhagappan (2008) merely after a decade.
The film also marks Thambi Ramaiah’s debut as a music director and has also penned the lyrics for the film. The movie stars Thambi Ramaiah himself in a prominent role alongside his son Umapathy Ramaiah in the male lead role and Mrudula Murali in the female lead role while Yashika Aannand, Samuthirakani, Radha Ravi and Vivek Prasanna also play pivotal roles in the film. The film was released on 3 August 2018 and received mixed reviews from the audience.
Kutti Maniyar (Umapathy), an arrogant young slacker who comes from an affluent family just similar to his father Narthanga Sami (Thambi Ramaiah) is jobless and thrives on selling off the ancestral property. Kutti, however in his bid inorder to win the hearts of the girl he loves, mends his way and starts a new business. Just as everything going well for Kutti, in a twist of fate, the girl is kidnapped and to make things, matters worse, his money also gets stolen.