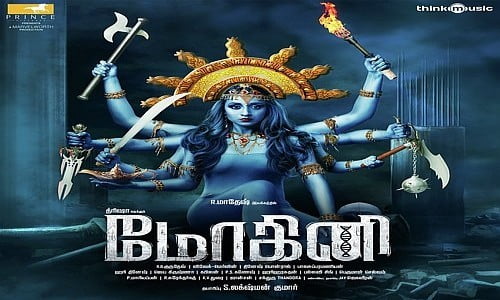 Mohini is a 2018 Indian Tamil-language horror comedy thriller film written and directed by Ramana Madhesh, starring Trisha and Jackky Bhagnani in the lead roles. The film, which was predominantly shot across London, began production in June 2016.The movie was released on 27 July 2018. Upon release the film received negative reviews and was a box-office bomb.
Vaishnavi (Trisha) is a popular chef in India. Her friend’s fiancé Cotton (Yogi Babu) is stuck in a situation that demands him to go to London to work as a chef, but he is not qualified. He asks Vaishnavi to accompany him to pose as an assistant and help him secure the job. Vaishnavi agrees and travels to London with Cotton and a relative Balki (Swaminathan). They stay with Ganesh (Ganeshkar) and his wife Madhu (Jangiri Madhumitha) and work at a restaurant. Vaishnavi meets Sandeep (Jackky Bhagnani) there, and they fall in love.
One day, on a boating trip in a river, Vaishnavi injures herself and washes off her blood in the water. This triggers the vengeful spirit of a dead woman at the bottom of the river. She possesses Vaishnavi, who goes on a killing spree. Her friends experience numerous paranormal occurrences and find that Vaishnavi is possessed. The spirit turns out to be Mohini (Trisha), a lookalike of Vaishnavi. Meanwhile, Sandeep proposes to Vaishnavi, and they get engaged. They meet Sandeep’s mother Menaka (Poornima Bhagyaraj) and his father Vicky/KVR (Mukesh Tiwari). Mohini is enraged seeing him, and this reminds her of why she was killed.
Mohini was an architect working for a construction company owned by KVR. She finds out about the child sacrifice rituals that KVR believes in and goes on to rescue children from a child trafficking gang. KVR and his men kill Mohini and throw her into the river. Now that she has found a doppelgänger in Vaishnavi, Mohini is back for revenge. Mohini kills KVR, but not before telling that all of his generation will be killed by her, which includes Sandeep. Menaka comes to know of this and tries to protect Sandeep from Mohini with the help of a monk (Suresh). She also contacts Mohini’s mother, who agrees to help with the rituals. The monk tells that in addition to the rituals, either Vaishnavi’s body must be destroyed or a human sacrifice has to be done to appease Mohini. They all prevent Mohini from attacking Sandeep and try to save Vaishnavi from dying. Mohini’s mother finds that because of her daughter’s vengeance, two innocent lives (Sandeep and Vaishnavi) will be lost. She realizes that Mohini’s spirit needs one human life in order to be satisfied, so she kills herself. Mohini’s spirit is finally at peace.
Later, it is shown that Mohini’s spirit lives on and hunts down anyone who tries to cause harm to children.