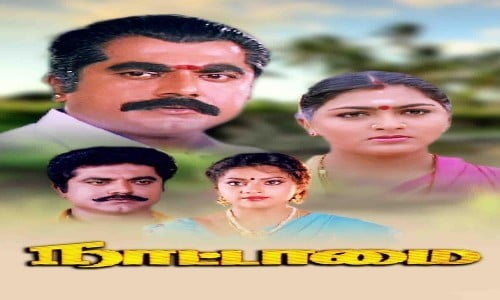 Nattamai (Eng: Village Chief) is a 1994 Indian Tamil-language drama film directed by K. S. Ravikumar. It starred Sarath Kumar, Meena and Kushboo in the lead roles. The film became a blockbuster among 1994 Deepavali releases and completed a 175-day run at the box office. It is considered to be one of the most popular Tamil films of the 1990s and in general. It became a trendsetter for many films in later years. The Goundamani-Senthil comic duo was one of the most popular aspects of the film.
R. Sarathkumar earned both the Tamil Nadu State Film Award for Best Actor and Filmfare Award for Best Actor – Tamil for his performance in the film.
Shanmugam (Sarath Kumar) is the village head, fondly called Nattamai. He is widely respected by everyone for his genuineness. He lives with his wife Lakshmi (Kushboo) and brother Pasupathi (R. Sarathkumar). Pasupathi is married to Meena (Meena). There is a long-standing enmity between Nattamai and his paternal cousin (Ponnambalam). A flashback is shown where Ponnambalam’s father kills Shanmugam’s father (Vijayakumar), following which Ponnambalam’s family is expelled from the village. Ponnambalam waits for the right time to attack Nattamai’s family. Ponnambalam’s mother (Manorama) is Nattamai’s paternal aunt. A new teacher (Rani), comes to the village and everyone suspects an illegitimate relationship between her and Pasupathi. One day, the teacher gets killed along with a death note mentioning Pasupathi as the reason behind her death, following which Nattamai expels Pasupathi out of the village. The teacher was actually killed by Ponnambalam, with plans of trapping Pasupathi in the murder. Manorama overhears the truth but gets locked by Ponnambalam at her home. Ponnambalam tries to kill Nattamai but gets killed by Manorama. Finally, Manorama informs the truth to Nattamai, which shocks him. Nattamai dies at the spot due to the guilt of giving a wrong judgment, and Pasupathi becomes the next Nattamai.