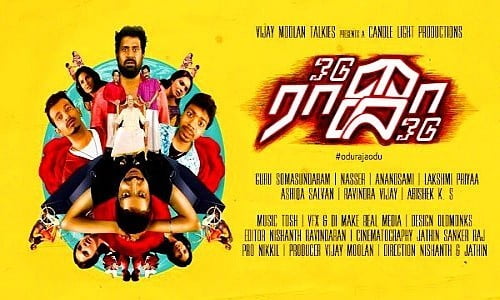 Odu Raja Odu (Eng: Run Raja Run) is a 2018 Indian Tamil black comedy drama film directed by duo Nishanth Ravindaran and Jathin Sanker Raj in their directorial debuts. Nishanth Ravindaran has also written the screenplay and handled editing. The film stars Guru Somasundaram in the male lead role alongside Lakshmi Priyaa Chandramouli in the female lead role while Anand Sami, Nassar, Simran, Deepak Bagga, Charu Hassan, Power Star Srinivasan, Venkatesh Harinathan, Sona Heiden play pivotal and supportive roles. The film is produced and distributed by Vijay Moolan Talkies. The film also marks the comeback of veteran actress Simran in a cameo role and also marked the acting debut of her husband Deepak Bagga who played the antagonist role. The movie is produced by Vijay Moolan and music is scored by debutant Tosh Nanda. The film released on 17 August 2018.
Manohar (Guru Somasundaram) is a jobless struggling writer whose wife pressurises him to get a set top box for her and he goes out with his friend who is a drug peddler, Peter (Venkatesh Harinathan) to fulfill her wish for their wedding anniversary. But to their misfortune, both Manohar and Peter are threatened by gangster Veerabadhran (Deepak Bagga) and his sidekick to close a deal for them. However things go awry for them as they land in a retired gangster Kali Muthu’s (Nassar) place for help, but it only lead to another mishap.