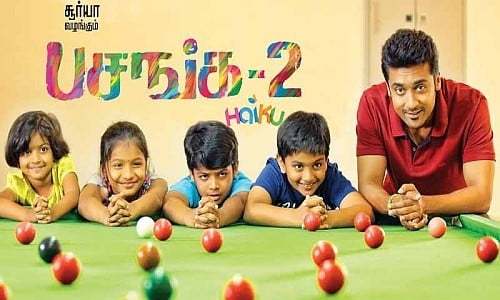 Pasanga 2 : Haiku is a 2015 Indian Tamil children’s movie directed by Pandiraj. A thematic sequel to Pasanga (2009), the film focuses on the issue of attention deficit hyperactivity disorder (ADHD) amongst children and is set in the city. The film, starring debutante child actors Nishesh and Vaishnavi alongside Karthik Kumar, Bindu Madhavi, Ramdoss and Vidya Pradeep, is produced by Suriya, who also appears in a guest role along with Amala Paul. The film will mark Pandiraj’s last of the ‘trilogy for children’, following Pasanga and Marina.
Music and soundtracks were composed Pisaasu fame Arrol Corelli . The soundtrack features for songs, the lyrics for which are written by Na. Muthukumar, Madhan Karky and Yugabharathi.
Kavin and Nayana are two children who get pushed out of schools because of their hyperactive activities. Their parents are not able to bear the attitude of their children and transfer them through many schools. Accidentally, they end up with a child psychiatrist, Tamizh Naadan and his wife,Venba. They help the parents understand their children. The film is based on how to develop a child.