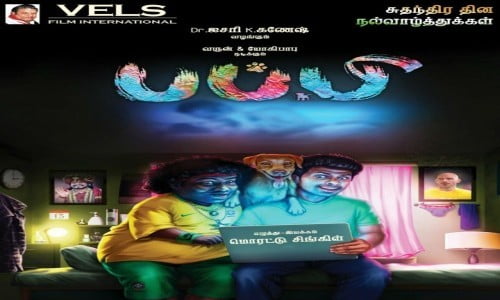 Puppy is a 2019 Indian Tamil-language comedy-drama film written and directed by Nattu Dev (credited as Morattu Single) in his directorial debut. The film starring Varun in his debut as a lead actor, Samyuktha Hegde and Yogi Babu is produced by Ishari K. Ganesh under his production banner Vels Film International. The music for the film is composed by Dharan Kumar. The film had its theatrical release on 11 October 2019 and opened to mixed reviews. The first look poster was unveiled on 13 August 2019 by actor, radio jockey and cricket commentator RJ Balaji. The official trailer of the film was released on 26 September 2019.
Final year college student Prabhu (Varun) has a strong urge to loose his virginity. His senior (Yogi Babu) guides him. Prabhu falls in love with his classmate Ramya (Samyuktha Hegde). His sexual curiosity lands him in trouble when he and Ramya have pre-marital sex. He gets biggest shock of his life when he comes to know that Ramya shows positive signs of pregnancy. His pet dog puppy is severely ill, which worries both Prabhu and Ramya. How will he fix the things forms crux of the story.