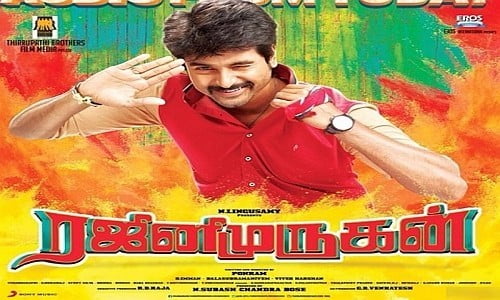 Rajini Murugan is a 2016 Indian Tamil-language comedy movie written and directed by Ponram, in his second venture after Varuthapadatha Valibar Sangam (2013). The film has Sivakarthikeyan and Keerthy Suresh in the lead roles, while Soori, Samuthirakani and Rajkiran play supporting roles. The film, produced by Thirrupathi Brothers, features music composed by D. Imman and cinematography by Balasubramaniem. Having gone through significant production delays, the film released on 14 January 2016 to positive reviews.
Rajini Murugan (Sivakarthikeyan) is an unemployed youth from Madurai who spends his days roaming around with his best friend Thotathree (Soori) and supplying food to his grandfather Ayyankalai (Rajkiran), a highly respected gentleman who has large properties of land. Ayyankalai wants to divide all his properties among his children and grandchildren, but except for Rajini and his father Malligarajan (G. Gnanasambandam), who is the headmaster of the local school, the rest of the family is settled abroad and never visit Madurai.
Meanwhile, following the advice of an astrologer (who claimed that Rajini will get married and be rich within three months), Rajini Murugan starts wooing his childhood sweetheart Karthika Devi (Keerthy Suresh). Karthika’s father (Achyuth Kumar), an ardent fan of Rajinikanth, was the best friend of Malligarajan and had given Rajini Murugan his name when he was born, but fell out with Malligarajan and his family due to a misunderstanding involving Rajiniand Karthika when they were children. Since then, Rajini Murugan and Karthika are not on speaking terms, and Karthika’s father forbids any sort of contact between the two. Nevertheless, Rajini Murugan opens a tea stall outside Karthika’s house to stay close to her and follows her day and night. Later, he and Thothathree start a water supply company. A gangster “Ezhrai” Mookan (Samuthirakani), whose only work is to extort 100,000 from businessmen, tries to swindle the same amount from Rajini, but fails and ends up paying 100,000 to him.
Ayyankalai, who is fed up with Rajini’s antics, decides to immediately divide his properties so that Rajini Murugan can benefit from his share of the property. He fakes his death, which forces his children and grandchildren to come to Madurai. During Ayyankalai’s “funeral”, Mookan claims that he too is a grandson of Ayyankalai (through the son of Ayyankalai’s first wife) and starts demanding his share of the property. This leads to confrontation between Rajini Murugan and Mookan and their feud is soon brought before the panchayat. The panchayat declares the verdict in favour of Ayyankalai and Rajini Murugan. Mookan, accepting defeat, receives 100,000 from Rajini Murugan as compensation. It is then revealed that Mookan staged the whole drama to get back his 100,000 from Rajini Murugan. Meanwhile, Karthika accepts Rajini Murugan’s love and her father also begins to approve their relationship.
In the end, Ayyankalai reveals that he does have a grandson through his first wife’s son. The grandson is revealed to be none other than Bosepandi from Varuthapadatha Valibar Sangam (Sivakarthikeyan). Bosepandi refuses to accept his share of his grandfather’s property and advises him and his family not to sell the property. Ayyankalai and Rajini Murugan agree with him.