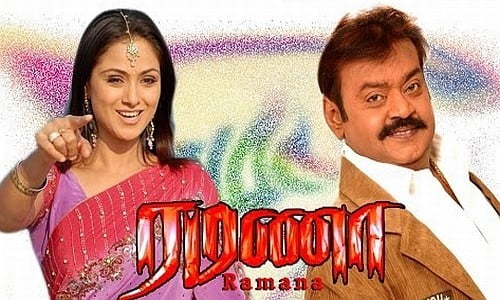 Ramanaa is a 2002 Tamil vigilante thriller film directed by A. R. Murugadoss, starring Vijaykanth and Simran. The film received positive reviews from both film critics and audiences and became blockbuster. Also, it was awarded the 2002 Tamil Nadu State Film Award for Best Film. Subsequently, the film was remade in several languages and distributed around the world.
The Film begins with the abduction of fifteen revenue officers. After three days in captivity, fourteen officers are released, but one is murdered. The police find a tape recording and a file on the dead officer’s body that provide significant evidence about the kidnapping and subsequent murder. The file suggests that the crimes were committed by members of the self-proclaimed “Anti-Corruption Force” (A.C.F.), a citizen militia seeking to eliminate corruption through vigilante means. The militia, acting as a kangaroo court, had “sentenced” corrupt officials in the area to death, beginning with the captured revenue officers who were apparently engaging in criminal activity.
The film’s setting then shifts to Ramanaa, a mild-mannered professor at National College, who lives in an independent house with four adopted kids. While visiting his adopted child at the hospital, Ramanaa discovers that the officials at the facility are engaging in extortion and fraud. After collecting evidence of the hospital staff’s deception, Ramanaa turns them over to the authorities. The plot ringleader is the hospital dean, who commits suicide upon discovery. His grief-stricken father, a local construction magnate named Bhadrinarayanan, vows to take revenge on the man responsible for his son’s death.
During the festival of Deepavali, Ramanaa’s apartment building collapses, killing many residents including his wife and daughter. Recovering from the incident, he demands to know who was responsible for the building’s collapse. He discovers that the building was built and owned by Bhadrinarayanan, who knowingly constructed the complex on loose soil. When Ramanaa confronts him, he is beaten by Bhadrinarayanan and his men, but manages to escape. In response to the actions of Bhadrinarayanan and the general corruption in the region, Ramanaa forms the Anti-Corruption Force (A.C.F.). Ramanaa and his A.C.F. ultimately capture and hang Bhadrinarayanan, along with other corrupt government officials.
Meanwhile, a local police constable begins building a case against the A.C.F. The constable eventually realizes that the A.C.F is primarily composed of students and alumni of Ramanaa’s school, and takes swift action against them. The A.C.F. members are captured and tortured by the police, but refuse to reveal Ramanaa’s identity. Ramanaa is overcome with guilt over his students’ sacrifice and surrenders himself, on the condition that the other members of the A.C.F. be released. Ramanaa is tried and convicted for the murders of Bhadrinarayanan and other government officials, and is sentenced to death. Public pressure from the sympathetic community forces the Chief Minister to offer Ramanaa an appeal. However, Ramana refuses, stating that he must face the consequences of his actions, and is ultimately hanged. The constable is offered a promotion for his role in disbanding the A.C.F., but he refuses out of guilt.