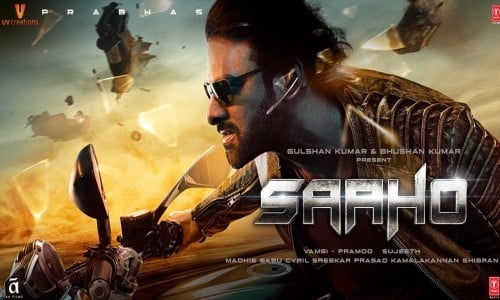 Saaho (Eng: May victory be yours) is a 2019 Indian action thriller film written and directed by Sujeeth. It was produced by Vamsi Krishna Reddy, Pramod Uppalapati and Bhushan Kumar under their respective banners of UV Creations and T-Series. Filmed simultaneously in Hindi, Tamil and Telugu, it stars Prabhas and Shraddha Kapoor, marking the former’s Hindi debut and the latter’s debut in South Indian cinema. The film follows an expansive criminal syndicate engulfed in a power struggle following the death of their leader all the while intelligence agencies use this to their advantage to take them down. Principal photography for the film began in August 2017. Filming took place in India, United Arab Emirates, Romania and Austria, and was undertaken with IMAX cameras. Produced on a budget of ₹350 crore, it is one of the most expensive Indian films ever produced. The film’s soundtrack was released under the banner T-Series. Saaho was released in India in theatres and IMAX on 30 August 2019.
Roy, the crime boss of Waaji City’s underworld, is killed in a deliberate car crash. Devaraj, the son of a former crime boss, declares himself the next leader of the crime syndicate; he is supported by some members, but opposed by the rest. However, Roy’s son Vishwank foils his plans by succeeding his father as the next boss. Vishwank is also determined to unmask his father’s murderer and sets out to lead Waaji City.
Roy had to set up a hydroelectric plant in India but was opposed by the local minister of India. However, he managed to get the permission signature on a letter from him. Then, the gangsters’ money is on a ship which gets destroyed in a bomb blast.
The story then turns to India, where a genius thief steals about two trillion rupees with ease. A nationwide manhunt ensues to find the culprit. Undercover agent Ashok Chakravarthy is assigned as head of the manhunt taskforce. Although he initially refuses, he relents after finding out that Amritha Nair, a woman whom he is infatuated with, will also be on the taskforce. The taskforce uncovers the whereabouts of the thief and traps him during his next robbery, after Amritha and Ashok fall in love. They let the thief take a black box that can open a locker containing treasures at a secure building in Waaji City.
Later, there is a chase in which Amritha, Ashok, and Officer David confront the thief at a bridge. It is then revealed that the thief was actually Ashok, and the officer pretender with them is Saaho, who is the actual person committing the robberies. As Saaho escapes with his partner David, Amritha, along with the entire Indian justice department, is stunned.
Afterwards, it is revealed that Devaraj killed Roy in order to gain power and that the money of the gangsters are with him and that he was the one who planned the blast. Amritha then tracks Saaho all the way to Waaji city and pretends that she is still in love with him but is actually helping Ashok. Meanwhile, Amritha actually falls for Saaho and betrays Ashok. Saaho takes Amritha around the world and when they are in Australia, (Victoria) Saaho holds Amritha by the waist and kisses her on the cheek. While they are about to kiss, Amritha is shot and taken away by Devaraj. Saaho is forced by Devaraj to give him the black box but later betrays him as he strikes a deal and gives the black box to Vishwank. Saaho also destroys Devaraj’s building and steals the money that he had with him. Amritha is then subsequently saved by Ibrahim, one of Vishwank’s associates. Saaho is then chased by Ashok and the police, with Amritha in a helicopter with a sniper. As the sniper is shooting him, Amritha tries to save Saaho by distracting the sniper, but the sniper pushes her towards the very end of the helicopter. Saaho saves her with a jet pack but is later arrested by the police.
Kalki, the crime lawyer of the underworld, who was with Vishwank the whole time, is revealed to be on Devaraj’s side. She accesses the vault with the black box and finds Saaho’s pictures with Roy, thereby indicating that Saaho is Roy’s son, she also finds a copy of the Bhagavad Gita thus revealing Roy’s two most precious things in the vault, meanwhile Amritha locates and chases Alex, a man she met in a bar in Mumbai, and Ashok meets up with Vishwank.
Saaho is taken to Devaraj’s village, where he battles with Devaraj’s goons and defeats them easily. Devaraj arrives, and Saaho reveals to him that he is Siddhant Nandan Saaho, the real son of Roy. He also reveals to Devaraj that he did this to avenge his father’s death. Vishwank and Alex also reveal this to Ashok and Amritha. Kalki also witness a portrait of Roy and Saaho inside the vault, thereby shocking all of them.
Ibrahim reveals Saaho’s real identity to the gang members, and Saaho becomes the next kingpin of the underworld. Some months later, Saaho locates Amritha in Innsbruck, Austria and confesses his love for her, and they share a kiss and hug each other. In a distance, a sniper aims at Saaho as he opens his eye to the danger.