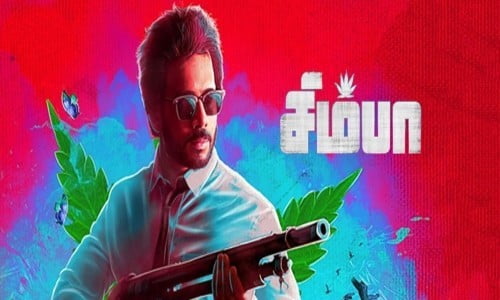 Simba is a 2019 Indian Tamil stoner comedy film, written and directed by Arvind Sridhar. The film features Bharath, Premgi Amaren, Swathi Deekshith and Bhanu Sri Mehra in the lead roles, while Ramana plays a supporting role. The film features music composed by Vishal Chandrasekhar. Simba is an experimental movie with a unique plot, with an average performance in the theaters, receiving mixed to poor reviews.
The film, which is billed as Tamil cinema’s first stoner comedy, revolves around Mahesh (Bharath), a dopehead who leads a lonely life. It is this reason, the film tells us, that has turned him towards drugs – for instant dopamine hit. One Sunday, when Mahesh has taken a ‘hit’, his neighbour Madhu (Bhanu Sri Mehra) requests him to look after her pet Great Dane, Simba. To Mahesh, who is under the influence of the drug, Simba (Premgi Amaren) appears as a person. The rest of the film is all about how Mahesh bonds with Simba and how they try to make Madhu fall in love with him.