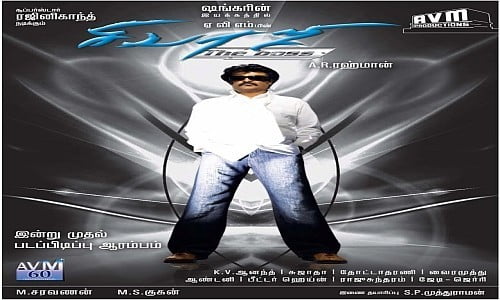 Sivaji is a 2007 Indian Tamil action-masala movie directed by S. Shankar and produced by AVM Productions. Rajinikanth and Shriya Saran play the lead roles, with Suman, Vivek and Raghuvaran playing other significant roles in the film. A. R. Rahman composed the soundtrack and background music, while Thotta Tharani and K. V. Anand were the film’s art director and cinematographer respectively.
The film revolves around a well-established software systems architect, who returns home to India after finishing work in the United States. On his return, he dreams of giving back to society with free medical treatment and education. However his plans face a roadblock in the form of the influential businessman, Adiseshan. When corruption also arises, he is left with no option but to fight the system in his own way.
Sivaji, an Indian software architect, returns to India from the United States. He aims to establish a non-profit trust called the Sivaji Foundation to build a network of hospitals and educational institutions to serve the poor free of charge. However, the influential businessman Adiseshan sees him as his competitor with the fact of the matter being that he runs profit-making educational institutions and hospitals. Sivaji is forced to bribe the corrupt civil service, but eventually, the bribes demanded become so high that he has to mortgage his house and sell his car to pay them. When Sivaji goes to court, he loses the case filed against him by Adiseshan regarding the methods Sivaji had used to open his foundation as a result of bribing numerous government officials. Simultaneously, Sivaji falls in love with a girl named Tamizhselvi. However, upon asking for his horoscope, an astrologer warns that their union will result in Sivaji’s death. When Tamizhselvi refuses the proposal due to her concern for him, he calms her fears and convinces her to marry him.
Following the loss in the court case, Tamizhselvi requests Sivaji out of fear not to come for her again. Sivaji is reduced to poverty. In revenge, Sivaji acquires evidence of 2 billion worth of illegal earnings in the possession of Adiseshan and uses the documents to blackmail him into giving him half the money. He further obtains details on people who have similar amounts of illegal earnings across Tamil Nadu, and blackmails them to give him half of their illegal wealth. He then transfers the money to the bank accounts of his friends around the world by “hawala” forgery. They then deposit the money as donations to Sivaji Foundation, making the money usable and legitimate.
Sivaji then informs the Income Tax Investigation and Vigilance Department about the details of the illegal money held by the tax evaders (including Adiseshan). He reopens the foundation, and soon is able to provide free, good quality education, infrastructure, services and employment to people in every district of Tamil Nadu. Led by Adiseshan, those who Sivaji blackmailed exploit Tamizhselvi’s innocence to silence him. Fearing for Sivaji’s life, she hands over his laptop to CBI officers hired by Adiseshan with all the information regarding the illegal money transactions. With presentable evidence, Sivaji is arrested.
At the jail, Adiseshan and the police force Sivaji to unlock his laptop. When he refuses, Adiseshan assaults him, leaving him for dead. To cover this up, Adiseshan and the police organise for thugs to shoot at the police van that will carry Sivaji’s corpse, making it look like murder by a third party. Sivaji, however, is faking; he was informed of the plans to kill him by a sympathetic police constable prior to the interrogation. Left alone in the room, he electrifies himself. Sivaji’s friend Dr. Chezhian and Tamizhselvi intercept the police van after being informed by him through a MMS and replace Sivaji’s body with a dummy before the thugs open fire. While everyone thinks that Sivaji is dead, Chezhian revives him using a defibrillator. Following Sivaji’s “death”, Adiseshan and the CBI still try to open Sivaji’s laptop by trying to fool the voice-detection program; this fails and all the data in the laptop is erased.
A few days later, while everyone wonders about the future of Sivaji Foundation, the revived Sivaji returns to take control of the foundation in the guise of a friend, M. G. Ravichandran. Though Adiseshan immediately realises that Ravichandran is actually Sivaji, he is unable to prove this to the police due to the tangible evidence of Sivaji’s “death” (his death being certified by a government hospital). “Ravichandran” promises to avenge Sivaji’s “death” and eventually manages to corner Adiseshan in the terrace of his medical college and fights him. During the fight, Adiseshan inadvertently strikes the roof of his campus’s terrace causing money hidden in the roof to fly around the campus. The students who spot the money go after them causing a stampede; Adiseshan is killed in the stampede. Sivaji Foundation soon becomes a frontier for India’s economic and industrial rise.