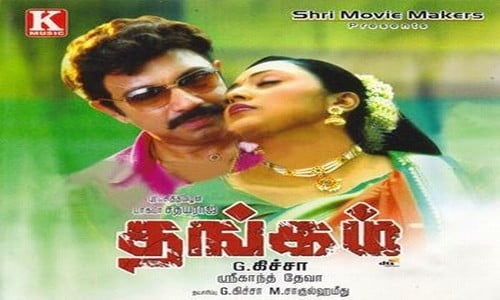 Thangam (Eng: Gold) is a 2008 Tamil action film starring Sathyaraj and Goundamani about the life of a village do-gooder in Tamil Nadu.
Set in a small town near Coimbatore, ‘Thangam’ portrays two families headed by Rajendranath and Mahadevan respectively. Thangam (Sathyaraj) is the son of Delhi Kumar and Aaruchami (Shanmugaraj) is the son of Mahadevan. Kaalai (Goundamani) is his uncle.
Thangam and his sister Bhagyalakshmi (Jayashree) share a special attachment. The sister finds a suitable girl (Megha Nair) for the brother, who tries hard to arrange her marriage in a grand manner.
The two families turn foes because of the local MLA, who is corrupt. The MLA wants to get rid of Rajendranath, who commands respect in the constituency. He gets close to Aaruchami, who is jealous of the respect commanded by him and his family.
The story has many twists and turns. Aaruchami, a compulsive womanizer, woo Thangam’s sister and makes her pregnant. Thangam, who is mad of his sister, makes Aaruchami marry him. Aaruchami commits a murder but he accepts the responsibility and go to the jail to save Aaruchami, to make the marriage of his sister possible.
Later, the relationship between the families is affected further with Mahadevan revolts against Rajendranath to make his son Aaruchami as MLA. In the process, he commits a murder and gets punished.
The battle gets worsened. Rajendranath and Bhagyalakshmi are killed. The rest of the story narrates how he avenges for the murders.