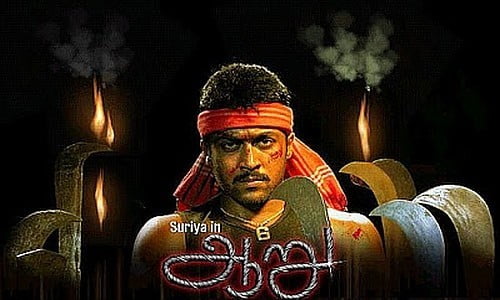 Aaru (Eng: Six) is a 2005 Indian Tamil language gangster film written and directed by Hari. It stars Suriya and Trisha Krishnan in lead role. The film’s score and soundtrack were composed by Devi Sri Prasad. The film released on 9 December 2005 and was average at the box office. The film was also dubbed and released in Telugu under the same title. The movie was dubbed in Hindi as The Return of Ghajini and in Bhojpuri as Dharam Ke Awatar.
The soundtrack was composed by Devi Sri Prasad and released by Star Music in India and Ayngaran in other international territories. The album was made up of 6 tracks.
Aarumugam, nicknamed Aaru (Surya Sivakumar), is a thug and dealmaker with a band of boys handpicked from the slums of Chennai. Aaru’s mentor Viswanathan (Ashish Vidyarthi) protects him, because he gives him the violent undercover he needs. When Vishwanthan declares war on his bitter rival Reddy (Jaiparakash Reddy), Aaru assists him. But Vishwanthan betrays him, resulting in the deaths of Aarumugam subordinates. He thus realises Vishwanathan’s true, evil nature and vows to destroy his power. There is also a subplot involving his romance with the college student Maha (Trisha Krishnan).