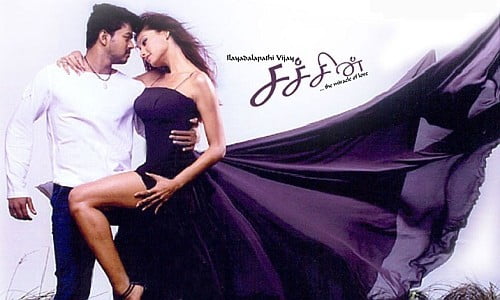 Sachein is a 2005 Tamil romantic comedy film directed by John Mahendran starring Vijay and Genelia D’Souza, Bollywood actress Bipasha Basu in her Tamil cinema debut with Vadivelu, Santhanam and Raghuvaran appearing in supporting roles. Based on the director’s earlier Telugu film Neetho (2002), the film is produced by Kalaipuli S. Dhanu and has the score and soundtrack composed by Devi Sri Prasad. The movie was released alongside Rajinikanth’s Chandramukhi and Kamal Hassan starrer Mumbai Express. The movie released to positive reviews and was declared as a commercial success at the box office.
Sachein (Vijay) joins a college in Ooty and falls for Shalini (Genelia) immediately on seeing her who also studies in the same college. But he comes to know from Arnold aka Ayyasamy (Vadivelu) that Shalini is so popular in college and there are so many boys trying to impress her. This makes him to take a different route and he starts mocking Shalini in front of her which irritates her as she is short tempered. Slowly they both become good friends. Santhanam (Santhanam) also loves Shalini and he feels jealous seeing her and Sachein being good friends and decides to separate them. Santhanam writes in their college wall, that he loves Shalini and this angers Shalini as she misunderstands that only Sachein has done it. Shalini shouts at him but he informs Shalini that he is so outspoken and does not want to write in college wall to convey his love which makes Shalini realize her mistake.
But to her surprise, Sachein informs that although he has not written it, but the content present on the wall is true which means that he is in love with Shalini. This again angers Shalini and she shouts at him that she considered him only as a good friend and she was not in love with him. Later Shalini overhears him challenging his friend that Shalini will convey her love within next 30 days as their college will be completed by then. Shalini challenges him that she will never fall in love with him.
Manju (Bipasha Basu) is also from the same college and she likes Sachein. Shalini gets jealous when she spots Sachein and Manju together often. But Manju informs Shalini that Sachein loves Shalini so much and asks her not to hide her feelings as it is very evident that Shalini too likes Sachein. This makes Shalini realize her love towards him. Sachein comes to know that Shalini’s parents have arranged a wedding for her and he meets Shalini on the last day of their college and says that he has lost the challenge and he will be leaving Ooty tomorrow. But Shalini hides her feelings towards Sachein and she plans to propose her love the next day as she wants to win the challenge by not conveying her love within the 30 days.
On the 31st day, Shalini is excited and goes to propose Sachein. But suddenly she meets Gowtham (Raghuvaran) on the way who is Sachein’s father. Gowtham is a billionaire and the entire college gets surprised that he is the only son of a rich business tycoon as he always stays very simple and down to earth. Now Shalini feels bad that if she proposes her love towards Sachein at this moment, then he might misunderstand that she decided to marry him after knowing that he is so rich and decides to stay calm. Sachein leaves to Coimbatore airport and Shalini also follows him. In the airport, Shalini could not control her emotions and proposes to him. She also says that it is her ego that didn’t let her convey her love during the last 30 days. Sachein feels so happy and the both are united.