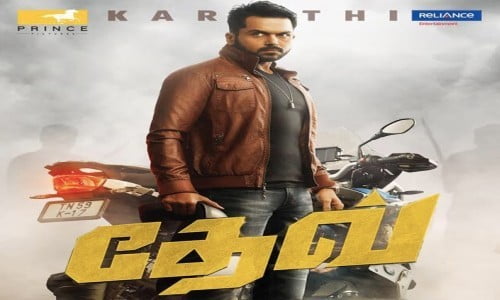 Dev is a 2019 Indian Tamil-language romantic action-adventure film based on road adventure written and directed by Rajath Ravishankar on his directorial debut.
The film stars Karthi and Rakul Preet Singh in the main lead prominent roles, while Prakash Raj, Ramya Krishnan, and RJ Vigneshkanth play supportive and pivotal roles in the film. Harris Jayaraj has been roped into score music for the film while cinematography is handled by R. Velraj and editing is done by Anthony L. Ruben. The film marks the first collaboration between Karthi and music director Harris Jayaraj. The film was earlier scheduled to have its theatrical release on 21 December 2018 on the eve of Christmas, and later scheduled to 10 January 2019 post Thai Pongal but was postponed to have its theatrical release on 14 February 2019 on the eve of Valentine’s Day to tight race at the box office.
The first half of the film is shown via narration by Dev’s friend Vicky, who is a stand-up comedian. Dev is an adventure-loving young man who is always in pursuit of new adventures. However, Vicky feels that he does not have an aim in his life. He always takes his friends with his adventures. Vicky wants to have a different life than Dev’s. He wants a normal office job than following his passion. Vicky wants him to be distracted so that he will not go for any more adventures and drag Vicky with him. Dev is encouraged to love a girl. He stopped Vicky from attending an interview for an office job. Dev made Vicky realize his talent in stand-up comedy and pursue it. Dev sees Meghna, a CEO from a startup in San Francisco on Facebook and sends her a request. He gets disappointed when she does not respond. Later, he understands that she is a big businesswoman who made it big on her own. He is reluctant to stalk a girl in this day and age. His clueless friends encourage him to stalk her anyways as it is a manly thing to do. As fate has it, he eventually sees her in India and throws away his ethics to try and win her heart. Meghna finds it difficult to trust men due to the childhood trauma she experienced when her father left her and her mother. Meghna lives in the USA. Dev’s family and his family’s business is in India. Will he win Meghna over? Will the relationship sustain?