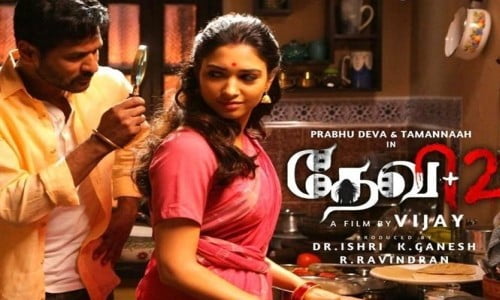 Devi 2 is a 2019 Indian Tamil horror comedy film co-written and directed by A. L. Vijay. It is a sequel to the 2016 film Devi. The film features Prabhu Deva and Tamannaah reprising their roles from the first film, along with Nandita Swetha, and Dimple Hayati in the lead roles. Kovai Sarala, Ajmal Ameer, RJ Balaji, and Saptagiri play supporting roles. The film released on 31 May 2019.
Krishna (Prabhu Deva) and his wife Devi (Tamannaah) arrive in Mauritius for Krishna’s work, leaving their daughter in India with Devi’s parents. Devi befriends a lawyer Lalitha (Kovai Sarala) there. One day, she sees Krishna with a woman Sarah (Nandita Swetha) and becomes suspicious and asks him about it but he replies that she mistook him for someone else and he was at work all day. Lalitha convinces Devi to not be upset and they both visit Krishna’s office but on their way they again spot Krishna with Eesha (Dimple Hayathi). Devi is disappointed and on Lalitha’s advice, she tries to seduce and win him over again. Krishna promises that he only loves her and no one else. Several similar incidents happen over the next few days and she comes to the conclusion that Krishna is definitely involved with Sarah and Eesha and decides to investigate.
Devi follows Sarah who belongs to a band led by Rudra (Ajmal Ameer). Devi comes to know about a man Alex who loved Sarah but died in an accident. She also finds out about a man called Ranga Reddy who wanted to marry Eesha and also died in an accident. Devi feels that something is amiss since both women have lost someone who loved them and there must be a reason why Krishna follows them around. That night she sees Krishna walking, so she decides to confirm her suspicions and addresses Krishna as Alex and Ranga Reddy. She is terrified to find that Krishna responds to both these names and Devi realizes that Krishna is possessed by ghosts of not one but two men.
Next morning Devi tries to leave Mauritius with Krishna but the ghosts intervene and she is unable to leave the country. Devi and Lalitha talk to the ghosts Alex and Ranga Reddy who say that they possessed Krishna on the ghost Ruby’s advice, in order to satisfy their unfulfilled wish, i.e: convey their love to Sarah and Eesha respectively. Devi learns that Krishna already had an acquaintance with a ghost called Ruby(from the previous part). Alex and Ranga Reddy sign a contract with Devi with rules similar to Ruby’s (no physical intimacy, will leave once mission is accomplished, will not enter the house, Krishna should never know of their existence). On the first day both Alex and Ranga possess Krishna together and create a lot of confusion so Devi makes changes to the contract with additional rules that the ghosts must take turns to possess Krishna and not possess simultaneously, Sundays are holidays and once Sarah and Eesha propose their love, they must leave Krishna alone. Alex and Ranga Reddy agree to this.
Devi and Lalitha help the ghosts to woo their girlfriends respectively by portraying Krishna as their brother “Krish” who is mentally ill because he loved someone that looked exactly like Sarah/ Eesha respectively but they have died unfortunately. Devi and Lalitha request the girls to pretend like declaring their love for him so he can try to return to his normal state . The girls take pity and agree to do so, but Krishna’s friend Ganesh(RJ Balaji) enters and sabotages the plan. The next day is Sunday, Eesha and Sarah meet Krishna by accident and learn that he is a not a crazy person like how Devi portrayed. Devi tries to convince them but the girls reveal that they are sisters and storm out angrily after understanding Devi’s lies. Krishna goes home with Devi where they are kidnapped and it is revealed that Rudra is behind this and he wants to marry and cheat both Sarah and Eesha for their money and he killed Ranga Reddy and Alex who came in his way and plans to kill Devi and Krishna since they came in his way now. Alex and Ranga Reddy learn of their murders and go to kill Rudra at his concert venue. Devi pleads with them to leave because the murder charges will be pressed on Krishna. The possessed Krishna pushes Devi away and she falls down but is helped by the chief guest, actor Raj Khanna (Sonu Sood) (who was interested in Devi in the previous part and warned Krishna to treat her well). Seeing her cry yet again, Raj is angry and follows Krishna to shoot him. Meanwhile, Lalitha meets Eesha and tries to explain the situation but Eesha responds that she hasn’t moved on from her past and declares that she still loves Ranga Reddy. Suddenly, Ranga Reddy leaves Krishna’s body as his wish is now fulfilled. Rudra tries to propose Sarah, but she also reveals that she has not moved on and declares her love for Alex, causing Alex to leave Krishna’s body as well. Rudra tries to force himself on Sarah but she runs away and Rudra spots Krishna outside. Raj follows Krishna as well and a cat and mouse chase ensues where Raj fires his gun at Rudra instead of Krishna. Rudra is still alive but has now lost all his memory. Krishna and Devi reconcile after finding that the ghosts are gone. Finally, they both leave Mauritius and we find that Devi has packed Ruby’s nameplate from the junk by mistake, indicating another sequel involving Ruby yet again.