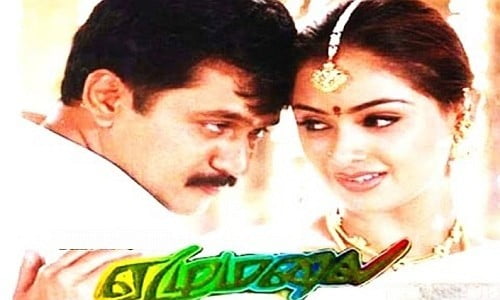 Ezhumalai is an Indian Tamil language action movie directed and lead role by Arjun released in 2002. The Film is the remake of Telugu Blockbuster Narasimha Naidu starring Balakrishna, Mukesh Rishi. This movie was later dubbed in Telugu again as “Simhabaludu”. Despite citing mixed reviews at the time of release, this movie ran well and had good box office collections.
There are two neighboring villages in Rayalaseema. Goons head one village and Raghupati Naidu (Vijayakumar) is heading another village. As Raghupati Naidu is peace-loving, his village is dogged by the misdeeds of goons from the neighboring village. In order to save the future of his village, Raghupati Naidu asks one male kid from each family to be given for the purpose of saving the village. Raghupati Naidu selected his fourth son Ezhumalai(Arjun Sarja) as his family’s contribution towards the security of the village. All these kids will be trained and prepared to protect the village. 15 years later.
Anjali (Gajala) is the niece of Jaya Prakash, who happens to be one of the goons from the goons’ village who later settled in another village. Ezhumalai sets up a naatya ashram to teach classical dance to the students. Anjali falls in love with Ezhumalai at the first sight. Anjali joins Ezhumalai as the student and tries to make Ezhumalai fall in love with her. Later on, she comes to know that Ezhumalai is already married and he has a kid too who is growing in the ashram. Ezhumalai is a widower as his wife Lakshmi (Simran) is no more. Anjali tries to get closer to the kid so that she can then marry Ezhumalai. The parents of Anjali fix up the marriage of Anjali with one of their relatives. When the uncle of Anjali comes to know that she is in love with a widowed dance master; he attacks him and threatens him that he would kill the kid. When they find Anjali missing, the entire battalion of goons invades the ashram of dance master only to find that he flew away.
Ezhumalai, after coming to know that goons were coming to attack him, vacates the ashram and boards the train. At the same time Anjali too boards the train, though Ezhumalai rejects it. Then a fleet 16 Whites Sumos containing goons chases the train using a parallel road. And they over take train and stop it forcibly at a station. Then we have around 100-armed goons surrounding the train and vying for the blood of Ezhumalai. After a couple of minutes Ezhumalai gets down the train showing his back to them. And then turns around. The moment, the goons realize that the dance master is none but Ezhumalai; they leave all their arms and run away to save their dear lives. This Movie is Blockbuster hit Then Ezhumalai explains Anjali his flash back.