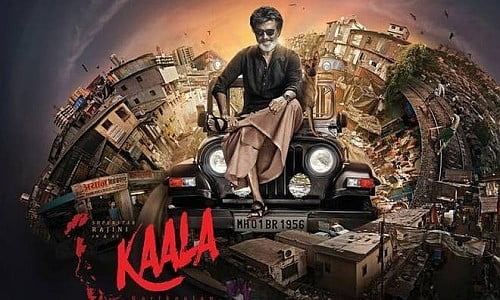 Kaala is a 2018 Indian Tamil-language sociopolitical action drama film written and directed by Pa. Ranjith and produced by Dhanush. Starring Rajinikanth in the lead role, the film was announced in 2016. The film was earlier scheduled to be released on 27 April 2018 but was postponed to June. Kaala premiered in Malaysia on 6 June 2018, followed by a release in 1,800 theatres in India on 7 June 2018. The film was also dubbed into Telugu and released as Kaala and in Hindi as Kaala Karikalan. Kaala is the first Indian film ever to be released in Saudi Arabia, following the country lifting its ban on public theatres in December 2017.
In Mumbai, the people who had migrated from Tamil Nadu are living in the slum of Dharavi. Union Minister Haridev “Hari Dhadha” Abhayankar (Nana Patekar) tries to evict the people and seize their land. Over the years, he becomes a minister and plans to clear the area to construct buildings with the help of his supporter Vishnu Bhai (Sampath Raj). Karikaalan (Rajinikanth), living in Dharavi, opposes it to protect the area and his people. His ex-lover Zareena (Huma Qureshi) returns to Dharavi as a representative non-governmental organization that hopes to improve Dharavi’s living standards. Hari Dhadha’s assassination attempt on Kaala kills Kaala’s wife Selvi (Easwari Rao) and elder son Selvam (Dileepan). Kaala decides to take revenge on him and encourages the people to protest against the government. Hari Dhadha creates a curfew in Dharavi with the help of his supporter Inspector Pankaj Patil (Pankaj Tripathi). Kaala fights with Hari Dhadha’s henchmen and the police. Kaala’s younger son Lenin (Manikandan), daughter-in-law Charumathi “Puyal” (Anjali Patil), and brother-in-law Vaaliyappan (Samuthirakani) fight alongside him. Pankaj gets arrested after a video taken by a reporter Praveen (Ramesh Thilak) provides evidence that the henchmen were brought into Dharavi to create problems with the police’s support. The police believes Kaala is dead and informs the media, but the people of Dharavi deny the news of his death. Hari Dhadha enters Dharavi at a function for constructing a new building. Here, Kaala reappears amongst the crowd. Hari Dhadha is killed by the people of Dharavi in a stampede, and the government stops the scheme. With Dharavi’s success, many slums start to follow Kaala’s way of protest to protect their neighbourhood, irrespective of illegal land occupation.