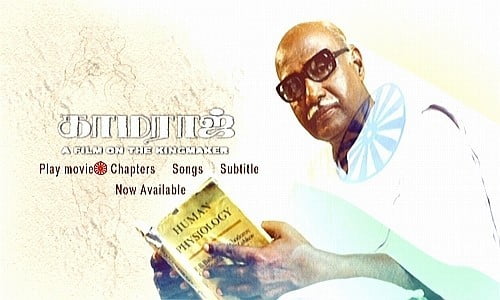 Kamaraj is a 2004 Tamil biographical movie directed by Balakrishnan made about the life of the Indian politician K. Kamaraj from Tamil Nadu, widely acknowledged as the “Kingmaker” in Indian politics during the 1960s. He was the chief minister of Tamil Nadu during 1954-1963 and a Member of Parliament during 1952-1954 and 1969-1975.
Music was composed by Ilaiyaraaja and the film was produced by Ramana Communications. The film had a theatrical release across India in February 2004.
Kamaraj is one history lesson meant to educate and inform, especially in an election year.
Clearly the director?s intentions are noble as Kamaraj?s achievements are incredible- a school dropout turned freedom fighter and a man who fought for the poor and oppressed and later became Tamilnadu Chief Minister, All India Congess President and there was not even a whiff of scandal associated with this chronic bachelor.
In fact Balakrishnan?s bio-pic of the revered congress leader Kamaraj is faithful to the life and times of the great man though at times he eulogises the subject. It is an intimately scaled biography that starts from the boy Kamaraj?s involvement in the freedom struggle and the nine years that he spends in jail.
Moving from Virudhanagar to Chennai, the screenplay touches on how Kamaraj shaped congress politics post independence. His becoming the chief Minister of Tamilnadu where he introduced path breaking reforms in the education system like noon meals for children in school and opening of more schools in rural areas. The industrialisation of Tamilnadu was started during his period and quite often you sense that the director wants to glorify the subject as his human kindness, gentlemanliness and spirits of camaraderie are interspersed throughout the film.