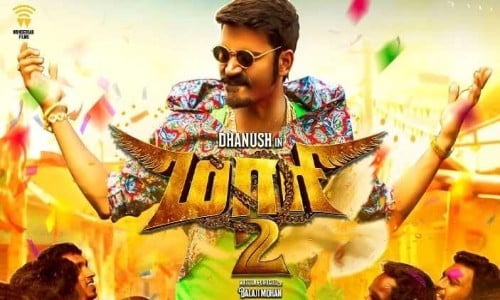 Maari 2 is a 2018 Indian Tamil-language action comedy film directed by Balaji Mohan. It is a sequel to his 2015 film Maari. Dhanush, besides producing the film under his company Wunderbar Films, also stars as the title character, reprising his role from the first film. Krishna Kulasekaran, Tovino Thomas, Sai Pallavi, Varalaxmi Sarathkumar, and Vidya Pradeep play other important roles, among others. The music was composed by Yuvan Shankar Raja with cinematography by Om Prakash and editing by Prasanna GK. The film released on 21 December 2018 to mixed reviews from critics.
Picking up from the prequel, the film starts off with Maariyappan aka Maari (Dhanush) as the fun-loving gangster with his sidekicks Sanikkizhamai aka Sani (Robo Shankar) and Robert aka Adithangi (lit. punching bag) (Kalloori Vinoth). Maari is chased around by Araathu Aanandi (Sai Pallavi), a “loosu ponnu” (lit. crazy girl) auto driver who is head over heels in love with him. However, try as she might, Maari does not give her a second glance and constantly shows his annoyance to her.
In a parallel storyline, Gangadhar Beeja (Tovino Thomas) is shown to have escaped from jail with the cell walls scrawled with the words “Kill Maari”. He is out for revenge, as his brother (Vincent Asokan), who was a lawyer, promised to get Beeja released from jail. Unfortunately, his brother is killed at the hands of Maari as the former tried to molest Aanandi’s elder sister. This is also the reason why Aanandi loves Maari.
Maari gets his 100th murder attempt on his life by his rival Singayya, and to celebrate, Kalai (Krishna Kulasekaran), Sani, and Adithangi throw Maari a party. While coming back, Maari gets attacked, and Aanandi takes him to the hospital and takes care of him.
Kalai’s brother Vallavan is shown to be a hand-in-glove with Singayya, who has formed an alliance with Beeja to overthrow Maari. As per Beeja’s plan, Vallavan asks Sani to send Aanandi for a job, which turns out to be drug smuggling, a job which Maari hates. Aanandi goes to do the job and gets caught by Kalai. On confronting Aanandi, she tells him that Maari asked her to do it. This sparks a doubt in Kalai’s mind. Vallavan is caught by Maari carrying the drugs, and when Maari confronts Kalai, a fight erupts. Maari and his sidekicks set fire to all the drugs, and Beeja kills Vallavan to make it look as if Maari killed him. Kalai gets enraged and orders his men to kill Maari. Maari is injured in the battle, and Beeja reveals himself as the perpetrator. Beeja then shoots Maari, but Maari is saved by Aanandi, who took the bullet for him, which ended up in her lower spinal cord, paralyzing her legs for life.
The new collector, Vijaya Chamundeshwari IAS (Varalaxmi Sarathkumar), comes out to restore order and stop all gang violence. Maari goes into hiding with Aanandi, whose legs are paralyzed. Eight years pass, and Beeja and Kalai have grown to become rich dons, but when Kalai has clear chance to become the MLA candidate of the ruling party, Beeja usurps that chance by threatening Kalai and his family. Vijaya, now the Deputy-Home secretary, in an effort to find Maari, posts his picture along with Aanandi’s on newspapers. Maari sees this and meets Vijaya, requesting her to remove the photos. Maari then reveals that he was living in Tenkasi with an elderly couple. Aanandi got pregnant, and a healthy baby boy was born. However, due to complications by the paralysis, Aanandi dies minutes after childbirth. Maari then raises the boy, called Kaali (Master Raghavan) with help from the old couple and Sani. Kaali is shown to have inherited his father’s behavior and keeps picking fights in school. Maari then requests Vijaya to stop coming after him (as a request) and says that he changed his ways. When Kaali sees some students in the older grade teasing a teacher, he complains to the principal. In retribution, the boys chase him and try to teach him a lesson, only to get beaten black and blue by Kaali. The area member of council (Stalin), one of the boys’ father, calls Kaali to hit him, but Maari goes and begs for forgiveness.
Meanwhile, the city police commissioner (Aadukalam Naren) mentions to the media that there is an informer within Beeja’s gang. Using his moles in the police department, Beeja tries to figure out who the mole is but fails. It is then revealed that there was not any mole and that the whole story was fabricated to identify the corrupt policemen in the department, including the commissioner. Also, Beeja has been in ties with the commissioner and was the mole himself. He had been leaking info about his men so that he may come out clear to become an MLA candidate. It is also revealed that despite begging for forgiveness, the counsellor insisted on his son beating up Kaali, and so, Maari beats up the counsellor and his henchmen. In a final encounter, the police turns against Beeja. Maari fights Beeja and paralyzes his legs for revenge for Aanandi and reveals to him that Maari killed his brother because Beeja could be killed by his own brother for property. Soon Beeja gets sentenced for life term prison. Maari is then shown with his sidekicks continuing his old life.