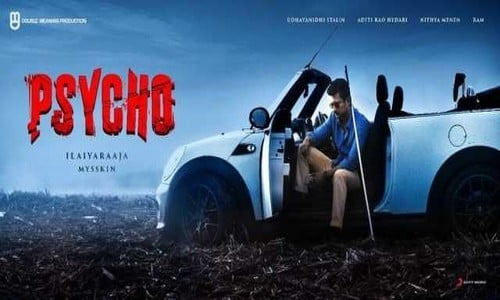 Psycho is a 2020 Indian Tamil language psychological thriller film written and directed by Mysskin. The film was produced by Arun Mozhi Manickam under Double Meaning Production. The film features Udhayanidhi Stalin, Nithya Menen, Aditi Rao Hydari, Ram, and debutant Rajkumar Pitchumani in the lead roles, while, Renuka, Singampuli, and Aadukalam Naren play supporting roles. Ilaiyaraaja composed the critically acclaimed soundtrack of the film, with cinematography by Tanvir Mir and editing by N. Arunkumar. Production began in September 2018, and the film released worldwide on 24 January 2020.
The movie opens with the psycho beheading a woman. Gautham (Udhayanidhi Stalin), a blind musician, is in love with a radio jockey named Dagini (Aditi Rao Hydari). After multiple attempts by Gautham, Dagini asks him to meet her at a place that she will be talking about in her radio session. Gautham listens to the radio all day and manages to find the place, which is a train station. Dagini, hopefully waiting for him, sees the killer all of a sudden. She feels afraid and tries to escape, but the psycho manages to sedate her.
Gautham reaches the place in time but fails to save her due to his blindness. However, using his sense of smell, he realizes that something is wrong. The psycho later spares Gautham’s life and takes Dagini to his secret lair. The next day, the police goes to Gautham and extracts information from him. A total of 14 girls were abducted, 13 of whom got murdered, and the recently kidnapped Dagini. Gautham soon realizes that the police cannot find anything, and he decides to seek out and save Dagini on his own terms. The psycho is about to behead Dagini, but he notices that there is no sense of fear in her. He asks her for the reason, to which she replies that Gautham will find her within a week regardless of her death and that the psycho will be answering for his crimes soon. The psycho leaves her chained to a wall and accepts that as a challenge. Gautham uses various methods to find the killer with the help of Kamala (Nithya Menen), a handicapped ex-police officer who was previously dealing with the case. Together, they both deduce that the psycho must be a rich man who owns pig farms using the smell from the decayed bodies of the murdered girls. Realizing that Gautham is getting closer to him, the killer goes on a killing spree. Gautham, Kamala and their associates all visit and enquire the owners of pig farms in the area, but they have failed in their attempts. Depressed, Gautham goes to his house and stays there alone. The psycho visits him, and Gautham acknowledges his presence. However, Gautham’s friend Rajanayakam (Singampuli) defends him and tries to chase down the psycho in his car.
Unfortuntely, the psycho hides himself in a dense area of tall grass and finally manages to kill Rajanayakam. The next day, Gautham mourns over the death of his friend and plans to drop his plan due to a large number of people’s deaths. Later, Kamala reveals that she had prior notice that the killer had gone to a college function. With regained hope, they all go back to the college and look at the recordings during that day. They manage to find someone suspicious, but his face got blurred. However, they notice a college staff sitting beside him.
Using relevant information from him, they manage to find the killer. In the meantime, Dagini manages to go around the psycho’s lair and sees a jailed woman and a dead police corpse. She reveals to her that the psycho was her former student at an borstal and the psycho used to masturbate, so she used to beat him 60 times everyday, for all 365 days in a year for his mistake. Around 11:45 PM, Gautham reaches the psycho’s lair. The psycho is about to behead Dagini, the intruder alarms gets activated. The enraged psycho runs to kill Gautham, but eventually, Gautham manages to cuff the psycho’s leg. Gautham later runs and rescues Dagini. They both manage to run away.
However, the psycho begs out, “Teacher, please don’t leave me alone here”. Dagini, who sees the light in him, places the keys to the cuff a few metres in front of him. Later, they both escape together with Kamala. The psycho is about to take the key, but the imprisoned teacher takes the key and swallows it, trying to punish him. The psycho gets infuriated and tears her stomach to get the key. He later releases himself and runs to find them both. Fortunately, they both leave, and he screams as he failed.
Later on, it is evident that Dagini has been affected by the Stockholm Syndrome, as she sympathizes with the psychopath when questioned by the press and refuses to consider him a killer but understands his innocent heart filled with pain and if it was his mother or sister, she would have cared for him so that he would not have become the killer that he was. The psycho sees the interview and realizes his mistakes after finally feeling loved by someone. The movie ends of with the psycho falling off a cliff with a smile on his face with the song Thai Madiyil (Mother’s Lap).