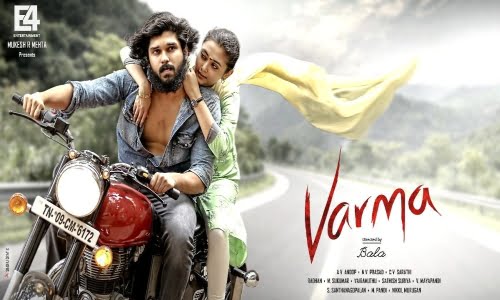 Varmaa is a 2020 Indian Tamil-language romantic drama film directed by Bala and produced by Mukesh R. Mehta of E4 Entertainment. It is a remake of the 2017 Telugu film Arjun Reddy. The film stars Dhruv Vikram and Megha Chowdhury. Filmed between March and September 2018, its release was initially cancelled after E4 Entertainment was unsatisfied with the output and re-shot the remake in 2019 as Adithya Varma with a largely different cast and crew.
Varmaa Vasudevan is a house surgeon. Despite being a brilliant student, he has severe anger management problems that earn the wrath of the college dean. Varmaa’s aggressive nature also earns him a reputation among his juniors as a college bully. After a brawl alongside his friend Kamal against members of the opposing team during an inter-college football match, the dean asks Varmaa to either apologise or leave the college. Varmaa initially chooses to leave the college but stays back after meeting the first-year student Megha.
Varmaa and his friend Ashok enter a 1st-year classroom and announce that Varmaa is in love with Megha and asserts that she is exclusive to him. Initially afraid, Megha starts adjusting to Varmaa’s overbearing attitude. She eventually reciprocates his feelings and they develop an intimate relationship. Varmaa graduates with an MBBS degree and leaves to pursue a Master’s degree in orthopaedic surgery. Over the course of 15 days, Varmaa’s and Megha’s relationship becomes stronger. Days later, Varmaa visits Megha’s house, where her father sees them kissing and throws Varmaa out.
Megha’s father opposes her and Varmaa’s relationship due to Varmaa’s brash behaviour and also because they belong to different castes. Varmaa demands Megha decide within six hours otherwise he will end their relationship. Following this incident, Megha’s parents seize her phone, preventing her from contacting Varma. By the time she manages to visit Varmaa’s house, he is drunk, injects morphine into himself, and becomes unconscious for two days. Megha is then forcibly married to someone from her caste. Varmaa learns about the marriage from Ashok and goes to her house. He is assaulted and gets arrested for making a scene. Varmaa’s father throws him out of the family home for ruining his reputation.
With Ashok’s help, Varmaa rents a flat and joins a private hospital as a surgeon. To cope with his emotions, he starts taking drugs, attempts one-night stands, buys a pet dog, and names it after Megha and drinks alcohol; all of which are unsuccessful. Within months, he becomes a successful surgeon and a high-functioning alcoholic who is feared by the hospital’s staff members, one of the reasons being his high surgery count. Varmaa’s self-destructing behaviour and refusal to move on worries Ashok. He persuades one of his patients, Raiza Wilson, a leading film star, to have a no-strings relationship with him, which he ends when she falls in love with him.
On a day off, Varmaa unwillingly agrees to perform life-saving surgery and collapses from dehydration. The hospital staff examines his blood samples, which show traces of alcohol and cocaine. The hospital chief files a case against Varma, who accepts the truth on the grounds of violating his professional ethics during an in-house court hearing, despite Ashok making arrangements to bail him out. Varmaa’s medical licence is cancelled for five years and he is evicted from the flat. The next morning, Ashok manages to reach Varmaa to convey his father’s death; he and they reconcile. Varmaa gives up his self-destructive habits soon after.
While leaving for a vacation, Varmaa sees a pregnant Megha sitting in a park. Convinced that she is unhappy with her marriage, Varmaa meets her after returning from his vacation. Megha reveals that she left her husband days after their marriage and continued to work in a clinic. She tells Varmaa that he is the child’s father, and they reunite.