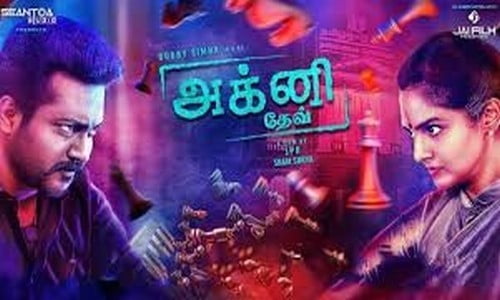 Agni Devi is a 2019 Tamil thriller film produced and directed by JPR and Sham Surya. The film is produced by JPR and Stalin under Jai Film Productions and Seatoa Studios. The film is directed by John Paul Raj and Sham Surya and edited by Deepak. Film stars Bobby Simha, Madhoo and Ramya Nambeesan are in the lead roles. The music is composed by Jakes Bejoy.
Agni Dev (Bobby Simha), a devoted cop, has taken charge of investigating the brutal murder of a journalist which happened in broad light. As the case progresses, Agni is asked by his senior, Charles (Bose Venkat) to stop from proceeding further with the investigation. He realises that Charles has been intimidated by Shakuntala Devi (Madhoo), a dreaded politician by abusive circumstances who was later revealed to be his mother he lost when he was four. How Agni tackles her and nabs the culprit forms the rest of the story.