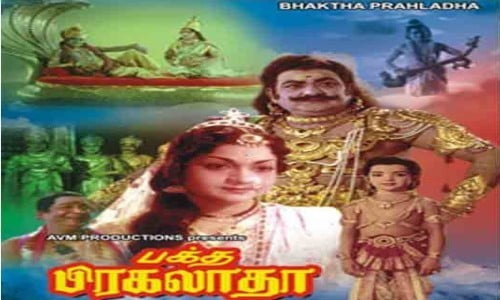 Bhakta Prahlada (Eng: Prahlada, the Devotee) is a 1967 Telugu-language Hindu mythological film produced by A. V. Meiyappan’s AVM Productions. Co-produced by his sons, M. Murugan, M. Kumaran and M. Saravanan, it stars S. V. Ranga Rao and Anjali Devi. Roja Ramani, in her film debut, plays the title character. Written by D. V. Narasa Raju and directed by Chitrapu Narayana Rao, Bhakta Prahlada is based on the legend of Prahlada, a character in Bhagavata Purana known for his devotion to the Hindu god Vishnu.
Bhakta Prahlada, released on 12 January 1967, was a commercial success and completed a hundred-day run in theatres. It received the Kamsya (Bronze) Nandi Award for Best Feature Film. Bhakta Prahlada was dubbed into Tamil with the same title and into Hindi (as Bhakt Prahlad) that year, with small changes in the cast. It was dubbed into Kannada with the same title, and released in 1974.
The Four Kumaras visit Vaikuntha, the abode of Vishnu. Jaya-Vijaya, the demigod gatekeepers of Vaikuntha, fail to recognise them and deny them entry. The Kumaras curse the pair, saying that they would have to give up divinity, be born and live as mortal beings on Earth. Vishnu fails to remove the curse, and offers two solutions: be Vishnu’s devotees in seven human lives, or his enemies in three demonic lives. Jaya-Vijaya cannot bear separation from Vishnu for so long, and choose the latter.
In their first demonic lives, Jaya-Vijaya are born as Hiranyakashipu and Hiranyaksha to the sage Kashyapa and Earth goddess Diti at sunset during an inauspicious time. Hiranyaksha, in an attempt to win over the deities, torments the Earth and its inhabitants. Bhudevi, the Earth goddess, goes to Vaikuntha and seeks Vishnu’s help. Vishnu arrives as Varaha, a wild boar-faced avatar, kills Hiranyaksha and saves the Earth. Seeking revenge for his brother’s death, Hiranyakashipu prays to Brahma for immortality. He becomes immune to being killed by various factors, including by man or beast.
Indra, king of the deities, tries to kill Hiranyakashipu’s wife Leelavathi and her unborn child. The sage Narada intervenes and brings Leelavathi to his hermitage, where she gives birth to a boy named Prahlada. Hiranyakashipu invades Vaikuntha, but cannot find Vishnu. Proclaiming himself king of all the celestial worlds, he returns to Earth. The deities approach Vishnu, who promises to kill Hiranyakashipu at the appropriate time.
Five years later, Prahlada is sent to the hermitage of Chanda-Amarka (the children of Hiranyakashipu’s master) for his education. After returning from the hermitage, Hiranyakashipu learns that Prahlada has become a staunch devotee of Vishnu and calls the deity Srihari. Hiranyakashipu explains to Prahlada that Srihari was responsible for Hiranyaksha’s death (and is their enemy), and asks him to stop worshipping Srihari. Prahlada politely declines.
Hiranyakashipu then makes several attempts to kill his son, hoping that the fear of death would make Prahlada stop praying to Srihari. Prahlada is starved, and imprisoned in a dark room. When he refuses to relent, Hiranyakashipu orders his soldiers to force elephants to trample Prahlada; when that fails, they throw the boy off a steep cliff. Srihari rescues Prahlada; the soldiers then summon a group of snake charmers and ask them to harm Prahlada with snakes. The boy prays to Srihari, and the snakes become garlands of roses. Shocked, the snake charmers beg Prahlada to bring the snakes back; he prays to Srihari, who restores the snakes. The snake charmers declare Prahlada their leader, further angering Hiranyakashipu.
He then orders his soldiers to tie Prahlada’s hands and feet and throw him into the sea. Convinced that the boy is dead, Hiranyakashipu laments killing his son to avenge his brother’s death and the fact that the child had more love for Srihari than for him. Prahlada is rescued by Srihari, who sends him back home. Initially happy to see the boy alive, Hiranyakashipu is angry that his son still worships Srihari. Narada confirms to Hiranyakashipu that Srihari is saving Prahlada, adding that he resides in the boy, whose death would defeat him.
In a final attempt, Hiranyakashipu orders Prahlada to drink poisoned milk in front of him. The boy drinks it and survives, making Hiranyakashipu believe that his death has arrived in the form of his son. When Hiranyakashipu asks Prahlada about Srihari’s abode, the boy replies that he is omnipresent. Hiranyakashipu then breaks a pillar with his mace, summoning Srihari out of it. Srihari arrives as Narasimha (another avatar of Vishnu with a man’s torso and a lion’s face), and kills Hiranyakashipu. Narasimha’s anger is cooled by Prahlada and the deities, who praise him in song and ask him to re-appear as Srihari. Vishnu appears, crowns Prahlada as king of the demons, and advises him to lead a virtuous life as a ruler.