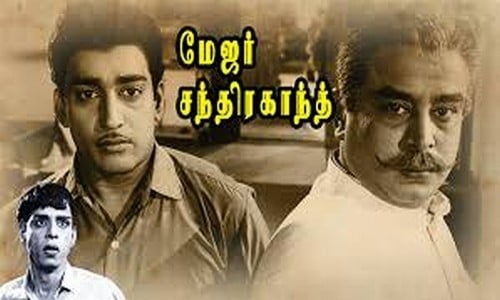 Major Chandrakanth is a 1966 Tamil-language drama film produced by A. V. Meiyappan and directed by K. Balachander. It is based on his play of the same name. The film stars Major Sundarrajan, Nagesh, R. Muthuraman, A. V. M. Rajan and Jayalalithaa. It tells the story of a retired and blind major who gives asylum to a fugitive wanted for committing murder, unaware that the victim was his younger son.
The film was released on 11 November 1966. It became a commercial success, and Sundarrajan, who portrayed the title role of a retired blind army major, acquired the prefix Major and was more commonly known as Major Sundarrajan thereafter.
Mohan is a tailor who lives with his younger sister Vimala. Orphaned at an early age, Mohan goes through a life of hardship and fulfill all his sister’s wishes. Rajinikanth, a womaniser, lures Vimala and cheats on her. Unable to face her brother, she commits suicide. Mohan confronts Rajinikanth and kills him in revenge. Now a fugitive, Mohan hides in the house of Chandrakanth, a retired and blind major. Mohan is amused and fascinated by Chandrakanth’s virtues and how he manages to live though he is blind. Mohan reveals why he is on the run from law and ironically the deceased happens to be Chandrakanth’s youngest son. Chandrakanth feels humiliated for nurturing Rajinikanth and is sorry for Mohan’s plight. Ultimately, Chandrakanth’s elder son Srikanth, an inspector, arrests Mohan along with his own father for showing hospitality to a criminal.