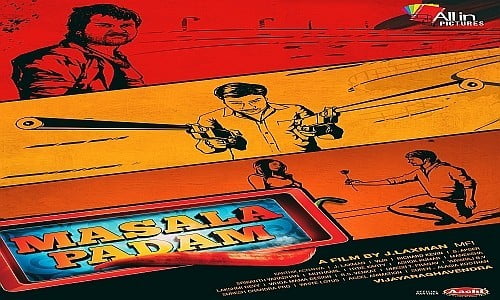 Masala Padam (Eng: Masala Film) is an Indian Tamil movie directed, filmed and co-produced by cinematographer Laxman Kumar along with Vijayaraghavendra. The film stars Shiva, Bobby Simha and Gaurav alongside Lakshmi Devy, who besides playing the female lead, had also written the film’s screenplay. The soundtrack and background score were composed by newcomer Karthik Acharya, while editing was handled by Richard Kevin.
Popular Audio label Lahari Music have acquired the audio rights of the film. Lahari Music, pioneer record label company is making its Re-Entry in to the Tamil music industry with Masala Padam. The film released on 9 October 2015.
As name indication there is masala (Mixture) of Comedy,Action,Romantic which can be note by three man lead role.
Bobby Simha is in action look in this film and Shiva is in comedy sense and Gaurav is in romantic.
Full risk is taken by Laxman Kumar who not only directed but also story written, co-produced and his cinematography.
Bobby simha is an national award winner for his acting with new Lead role Gaurav and cinematographer Laxman Kumar.