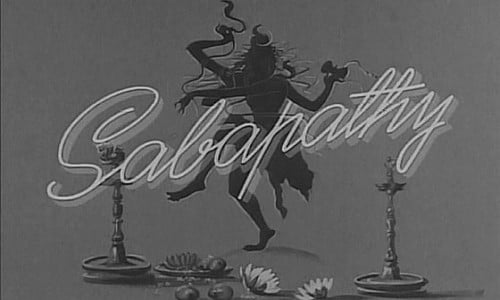 Sabapathy is a 1941 Tamil comedy movie directed and produced by A. V. Meiyappan and A. T. Krishnaswamy, starring T. R. Ramachandran, Kali N. Rathnam, C. T. Rajakantham and K. Sarangapani. The film is regarded as Tamil cinema’s first full-length feature comedy film. Music is by Sarawathi Music Troupe.
The film tells the story of a happy-go-lucky young man Sabapathy and his man servant (also named as Sabapathi). Sabapathy, son of a rich socialite and politician, Rao Sahib Manikka Mudaliar, neglects his studies and repeatedly fails his high school examinations. To make matters worse, his marriage is arranged with Sivakami, daughter of a friend of his mother, Thribura Ammal. While Sabapathy’s father initially rebukes Sivakami for distracting his son from his studies and Thribura Ammal for her decision to marry him off before completing his high school studies, he relents when he finds that Sivakami was actually assisting him in his preparation for the examinations. The film ends with Sabapathy eventually clearing his high school examinations with the help of his wife.
The film begins with the introduction :
“ “….Sabapathy Mudaliar is the son of Rao Sahib Manikka Mudaliar and a pet of his mother Thiribura Ammal. He is studying in the Matriculation class. He is a fool with some intelligence. His man servant is an even greater fool. Both their names are the same. The antics of these two gems forms the foundation of this story…….”